A couple weeks ago, Relevant Magazine published an essay on Christianity’s tenuous relationship with humor titled Why Christians Aren’t Funny. Christian and Jordan consider themselves moderately funny and definitely students of comedy, so they invited the article’s author, Larry Shallenberger, on to discuss the topic of Christians and their weak-ass senses of humor. Larry is a pastor and writer from Eerie, Pennsylvania, and long-time member Burnside Writers Collective. They discuss the cultural implications of not being funny, why Christians aren’t historically linked with comedy (it’s probably because of Northern European roots), and the value of humor in spirituality.

Later, Christian and Jordan discuss the Oscar nominations and make a few picks. Then they discuss a local news story in which someone covered up the “ST” on a stop sign with “PO”, and talk to an artist in Boulder who sells poop signs online. Unfortunately, that interview wasn’t entirely recorded. 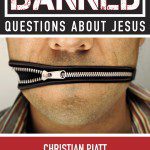