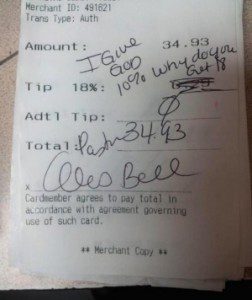 Yes, I just added “gate” to a word that really doesn’t merit it. But honestly, pastor Alois Bell’s “zero” tip at an Applebees recently has become the most talked about non-tip in recent history.

In case the stone you’ve been slumbering under doesn’t get wifi, here’s a brief summary of the story.

Pastor Alois Bell, who heads a ministry called World Deliverance Ministries Church, occupied a table at her local Applebees with at least seven other folks. We know this because the receipt indicates an automatic 18% gratuity added for parties of eight or more, which is the company’s policy. When the bill came, Bell struck through the tip with her pen, writing a “0” in its place. And then, to drive her point home further, she added the following note:

And then she signed the receipt “Pastor Alois Bell.”

Chelsea Welch, a waitress at the restaurant, took a photo of the receipt and posted it to Reddit, a news aggregator site, where it went viral. Subsequently Pastor Bell got buried under a mountain of hate mail from people all over the country, so she went to the Applebees manager and complained that her reputation had been ruined. Per the company’s policy, the waitress was fired, and that’s when the story really hit the mainstream news.

So, what to make of all of this? I’ve come up with a highly empirical scoring system, which I’ve dubbed the “WIN-MEH-FAIL” system, to assess various ups and downs in this tip-gate drama. (Hint: there’s a scarcity of winning in this story. Sorry Charlie Sheen.)

First, let’s take a gander at Pastor Bell’s written note. Clearly she draws a false correlation between tipping and tithing. See, Christianity calls on you to give away a

tenth of what you make, whereas tipping is not based on your gross income, but rather on the bill for the food you put in your face. – FAIL

Next, there’s the matter of crossing out the auto-tip. I get that she may feel the 18% is excessive, or maybe her service was sub-par, but in most restaurants – particularly big chains like Applebees – the menu clearly states the terms of automatic gratuities being added. So by coming into the restaurant and eating at a big table, you enter into a sort of social contract with the restaurant and its staff to abide by those rules. – FAIL

I’ve read several stories about this, and some accounts have noted that Chelsea Welch actually was not the waitress taking care of Pastor Bell’s table to begin with. Rather, her associate did, and then showed her the receipt later in disgust. I don’t blame the server for showing her friend, as the lack of tip and the extra note were especially offensive. I don’t even begrudge them for putting the receipt online. But come on, folks – how hard is it to blur out the name of the patron? Welch, in protesting her firing, has claimed she took every possible measure to protect the identity of the customer. But obviously, that’s not the case. I’d also point out that Reddit is a site particularly known for its trolls, and although it’s hard to truly know the heart of Welch at the time, it seems likely enough to me that she meant specifically to embarrass and maybe even harass Pastor Bell. – FAIL

Some folks have criticized Applebees for canning Welch in the wake of the scandal. I understand wanting to stand up for the “little guy,” but first, the company has a corporate policy that was violated. Second, the potential loss of business if they bent the rules when an employee violated the privacy of a patron could be huge, so I don’t blame them for what they did. It sucks, but I get it. In response, some people have started online petitions to get Welch her job back. Ah yes, the petition: the contemporary answer to the question, “What is the absolute least I can do while still patting myself on the back for being a quasi-activist?” – MEH

Last but not least, there’s the promotion of negative stereotypes of Christians being notoriously bad tippers. Being ridiculously cheap is one thing; doing it and then putting a fine point on the fact that you’re the pastor of a church is going out of your way to make the faith you claim look bad. And the thing is, I agree to some extent with the stereotype. I waited tables for years, and I’m sure many of the good tippers I had were Christians. But the fact is that the bossiest, most unpleasant people to wait on generally came in well-dressed with their families on Sunday afternoons. And overall, those folks tipped far worse (if at all) than anyone else I waited on. In fact, there were many times (yes, really) when they would leave a Bible tract for me instead of an actual tip.

Funny, but when I showed the tract to my apartment manager, she didn’t care to accept it as rent payment.

We Christians wonder why folks see us as judgmental, selfish or hypocritical, and then we see stories like this. Don’t agree with me? Ask someone you know who has waited tables; I’m betting they’ll have a similar story. So what do we do about it? For one, I try to make a point to tip generously, whether people know I’m a Christian or not. But if it happens to come over the course of a meal, I usually tip more. That’s because in that moment, like it or not, I represent all other Christians to that service person. What I do and say matter, whether it’s only to one person, or if it becomes a viral sensation online. But it really shouldn’t matter. If I’m acting out of love, in a way that reflects how I would want to be loved, then the right thing to do is more than clear.

February 6, 2013
The Ikea Effect, Slow Church and Laboring Our Way Into Love
Next Post 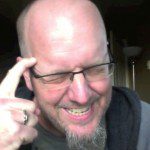 February 9, 2013 VIDEO Church Sign Epic Fails, "Mormons Rock" Edition
Recent Comments
43 Comments | Leave a Comment
"awesome."
Brandon Roberts Not “That Kind” of Christian
"nice article."
Brandon Roberts Talking Sex with Invisibilia’s Hanna Rosin
"Thanks for a fun romp. As a Presbyterian minister, I would have welcomed you gladly ..."
Zeigler John Leaving A-Holiness Behind
"Dear Sarah and Christian,I'm sorry for what has happened to you and your mother and ..."
Amazingaljicrowley3679 Letter From a “Demon Possessed” Woman
Browse Our Archives
get the latest from
Progressive Christian
Sign up for our newsletter
POPULAR AT PATHEOS Progressive Christian
1