I was invited to participate in a debate as part of Oregon State University’s Socratic Club series. The topic was “Hell and the Love of God.” I debated against, Todd Miles, a professor at Western Seminary in Portland, who took the position that the existence of hell as a place of eternal conscious torment was consistent with an understanding of a loving God. I took the position that it is not consistent with a God of love.

Each of us was invited to offer a 20-minute introductory lecture on our position. Below is the manuscript for the first half of my lecture. Part two is available HERE. Eventually, the Socratic Club will be posting video of the event, including much more than just my introductory talk here. I will post segments of the video as they come available.

I was born the only son of a Southern Baptist and an atheist. So it stands to reason that I split the difference in my adult life and became a heretic. I grew up in the Baptist church, memorizing scripture as part of our “sword drills,” and arming myself with the necessary tools to convert my friends to the side of righteousness.

The Bible was a critical means to that end of saving souls, and so it was important to know it well. But as I got older, my understanding of what it meant to know scripture began to diverge from the teaching of my church. I was being taught at school to think critically and question everything, while at Church, those same kinds of questions were not welcome.

I was taught that the earth was 5,000 years old, that scientists fabricated the fossil record to fit their agenda, and that some people – actually, a lot of people – really, most people – were going to hell.

Including most of my Jewish friends. And including my own father. And if I wasn’t careful, I’d be next. I remember waking up, shaking in my bed from dreams of the hungry flames of hell licking at my heels. My daily decisions we’re increasingly governed by fear and guilt rather than by love or a sense of what was right.

Finally, after asking one too many questions, my youth minister threw his Bible at me. “If you can’t believe every word in this book exactly the way it’s written,” he yelled, “then it doesn’t mean shit!” Well, I can’t. I’m sorry. So count me among the goats from now on, I guess.

While Jonathan Edwards wasn’t the first to preach about hell and condemnation, his ‘Sinners in the Hands of an Angry God’ sermon in 1741 crystallizes the beginning of a modern movement in the church. Edwards employed fear of punishment as a primary means for conversion and doctrinal adherence. Meanwhile, his congregants fainted in the aisles and clung to the pews to avoid being dragged down into the abyss.

We can argue day and night about whether or not fear-based theology is effective, biblically accurate and even necessary. But it’s worthwhile to consider where our
contemporary ideas about hell even come from.

First, we have to consider what it is we’re talking about when we say “hell.” Is it a place of eternal conscious torment? Is it effectively the same as the annihilation of the soul, when one ceases to exist, even in the spiritual sense? Is it less physical and more of a conscious torment, where we, bound by our sins, spend eternity aware only of our irreconcilable separation from God?

Is it something awful but not eternal? Can we earn our way out? Does it have different levels like Dante’s “Inferno?” For the sake of this discussion, I’m working

Donald Miller, bestselling author of the book, “Blue Like Jazz,” said, “If the religious fundamentalists are right, heaven will be hell. And almost nobody will be there.”

Author and former pastor Rob Bell, best known for his bestselling book, “Love Wins,” stirred up a tidal wave of controversy not so much for suggesting there wasn’t a hell, but for suggesting a loving God would ensure that such a place would sit empty.

I want to geek out on some semantics for a minute before getting into some of the other really nerdy stuff I have to say. Let’s consider, for a second, the phrase, “Eternal Conscious Suffering.”

Let’s take the first word: Eternal. By definition, eternity cannot have any beginning or end. So by definition, if we’re to be condemned to an eternal hell, we are already there. Now, some would argue that life on earth is hell enough, but even the most ardent Christian apologist would not suggest that this, here and now, is hell.

Although I told someone at my church in Portland about having a two-hour debate on this topic, and he was pretty sure that sounded like hell to him.

Next, consider the word “conscious.” Consciousness is a manifestation of the human brain, a tool that helps us know who, where and when we are. Without it, we have no awareness of the distinction between us, our inner world and the rest of the outer world. Without consciousness, there is no “I” or “other.” At the point of physical death, consciousness as a cognitive function stops.

Is there such a thing as soul consciousness? Perhaps. But for what purpose? To what end? In Romans 8 verses 38-39, the Apostle Paul tells us that “neither death, nor life, nor angels, nor rulers, nor things present, nor things to come, nor powers, nor height, nor depth, nor anything else in all creation, will be able to separate us from the love of God in Christ Jesus our Lord.”

In first John, chapter 4, verse 8, we have one of the most famous verse in scripture: “Whoever does not love does not know God, because God is love.” Note that it doesn’t say “God is like love,’ or “God has love.” It says that “God” and “Love” are one and the same. So God is love, and nothing we can do in life or death can separate us from God. 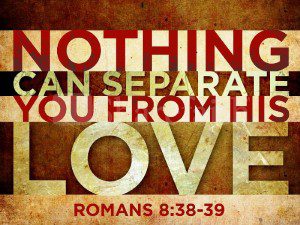 Perfect unity with love, it seems, would eliminate the necessity for consciousness. The experience of oneness with God (which Paul says is inevitable because of Jesus) is the closing of the gap between “self” and “other.” There is no separation, and therefore, no use for consciousness, never mind the scientific impossibility of human consciousness as we understand it continuing after physical death.

Third, we need to understand what it means to suffer. Bear in mind that suffering is different than pain. While pain is a physical response to threat or injury, suffering deals with emotional or psychological pain. Though this can be brought on by physical pain, it can also be related to trauma, loss or separation.

So both consciousness and suffering seem dependent on some separation being present.  In this case, that would be our separation from God, yet Paul tells us this isn’t possible.

And if such separation can and does exist beyond physical existence, we’re left with a number of troubling questions we have to contend with, like:

These questions present a conundrum, because if God can’t expiate sin without our participation in asking for that forgiveness, then God is weak. If, instead, God chooses not to forgive sin unless we ask for it, opting instead to let us suffer for all eternity because of our mistakes, then God is not loving.

(Part two of this lecture will be available on the blog tomorrow.)

I loved Netflix Messiah. You might...
Brad Jersak
Related posts from Christian Piatt