Talking to My Son About Boston

Talking to My Son About Boston April 19, 2013 Christian Piatt

I woke up this morning, like everyone else, to the news of a shootout with one suspect in the Boston Marathon Bombing and the ongoing manhunt for a second brother. Like many others, I’ve heard lots of misinformation over the past few days about whether officials did or didn’t have a suspect, whether they did or didn’t have them in custody, and so on.

“I heard someone dropped a bomb on Boston,” said Mattias, my nine-year-old son, over breakfast while I scrolled through the breaking news reports.

“Not exactly,” I said. “It was two guys. Two brothers who came from Russia to go to college at MIT.” They put homemade bombs in and around trashcans by the finish line of the marathon.”

“Maybe they were angry about something, and they didn’t know how to talk about their feelings.” 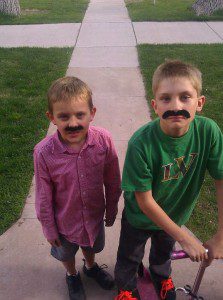 “Did they hurt people?”

“And they didn’t do anything to deserve that.”

“Did they kill anyone?”

“Three people,” I said, hoping his questions would stopp, while also knowing well enough they wouldn’t.

“Well,” I sighed, “a young woman who also was a student, and a boy…” I watched his face fall and his mouth go slack. We sat in silence for at least a minute, though it felt like hours.

“That’s really terrible,” he whispered. I nodded in silence. “That kid didn’t do anything.”

“It’s pretty messed up,” I said. Then his face began to harden.

“If I saw those guys,” he raised his voice, “I would take a cinder block and…” his voice trailed off as he realized the hopelessness of trying to make anything right out of such chaos, such senseless violence.

“I know, buddy. It’s hard to understand. And it’s okay to have feelings about it.”

“I hope they feel really bad about what they did,” he scowled. Amy helped slip his backpack over his shoulders as we scooted him toward the front door. He was late for school. “Oh, and don’t forget to bring cupcakes by the school today for the carnival,” he said. “Store-bought only.”

“All right buddy. Try to hustle so you won’t get a tardy slip.”

Store-bought cupcakes. Because God knows what someone might do to homemade treats for elementary school kids. 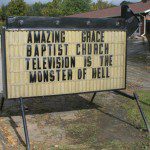 April 21, 2013 Church Sign Epic Fails, "Monster of Hell" Edition
Recent Comments
5 Comments | Leave a Comment
"awesome."
Brandon Roberts Not “That Kind” of Christian
"nice article."
Brandon Roberts Talking Sex with Invisibilia’s Hanna Rosin
"Thanks for a fun romp. As a Presbyterian minister, I would have welcomed you gladly ..."
Zeigler John Leaving A-Holiness Behind
"Dear Sarah and Christian,I'm sorry for what has happened to you and your mother and ..."
Amazingaljicrowley3679 Letter From a “Demon Possessed” Woman
Browse Our Archives
get the latest from
Progressive Christian
Sign up for our newsletter
POPULAR AT PATHEOS Progressive Christian
1