Five Questions with Sarah Thebarge, Author of “The Invisible Girls”

Five Questions with Sarah Thebarge, Author of “The Invisible Girls” May 18, 2013 Christian Piatt

Sarah Thebarge is the author of The Invisible Girls, a new memoir from Jericho Books. I was fortunate to get a few minutes to ask her a few questions about her touching, funny, compelling new piece of work.

Q:  Your book is about Somali Refugees and also about your survival of breast cancer.  How do you write one book about both things?

A:  When I met the Somali mom and her girls on the MAX the first time, we had a lot of differences – different religions, ethnicities, skin color, and language.  But as I developed a relationship with them, I realized that we had a lot in common at the core.  Because I’d been a little girl growing up in a fundamentalist culture, where men buried you under yards of fabric and lists of rules and taught you that women were supposed to be silent.  And I knew what it was like to be a refugee of sorts, because after I nearly died of cancer in my 20’s, I sold everything I had and got on a plane with a suitcase of clothes and flew from the east coast to Portland, OR and started over.  And so even though the narrative lines of the Somali refugee family and my cancer experiences seem disparate, they actually weave together well, because all this time, I’d been an Invisible Girl, too.

Q:  You have a good deal of humor in your book.  How do you keep a sense of humor about such serious subject matter?

A:  My sense of humor developed while I was going through treatments for cancer.  The seven months I was enduring surgeries and chemo and radiation were grueling, I was sure I wasn’t going to make it.  I went through all the emotions you can imagine – I got angry, I cried, I got frustrated – but none of those things made me feel better.  And then one day I thought, The only tactic I haven’t tried yet is humor.  I picked up great essay collections by David Sedaris and Augustin Burroughs, and laughing at their stories was an incredibly helpful emotional release.  Laughing in the midst of suffering kept me sane because it gave me a respite from all the pain I was in.

Q:  What has the response been from the public so far to your book?

A:  It’s been amazing.  A few weeks ago I was speaking at an event in Orlando with another author whose book was recently nominated for a Pulitzer.  We each spoke for 20 minutes and then did a book signing.  There were a handful of people in line to get his book, but the line for The Invisible Girls wrapped around the walls of this huge hotel ballroom.  That kind of response has happened a few times now.  It’s not like people are standing in line to meet me – nobody even knows who I am – but I think when they hear the story, they hear grace.  And when they’re standing in line for an hour, they’re signing up to learn more about that grace and hopefully have it infuse their life, too.

Q:  What do you hope people take away from reading your story?

A:  I hope that when people close the book, they don’t think, Gee, good for her.  Or, That was a crazy thing that happened to those Invisible Girls.  I hope readers realize that there are marginalized, invisible people in all of our lives.  And I hope each of us has the love and the courage to go out into our own lives and start to see invisible people for ourselves.

A:  I hope to keep traveling and speaking, telling the story of The Invisible Girls and hopefully encouraging people to see and care for the invisible people in their lives.  And I hope to keep writing, too.  I just finished writing my second book, which is scheduled for release in the fall of 2014.

Sarah will be doing a book discussion, Q & A and signing at First Christian Church in Portland on Wednesday, May 22nd, 2013. Refreshments will be served and books will be available for sale. The event is free of charge.

May 16, 2013
The Absurdity of Legislating Sexual Morality
Next Post 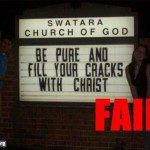 May 19, 2013 Church Sign Epic Fails, "Fill Your Cracks" Edition
Recent Comments
0 | Leave a Comment
"awesome."
Brandon Roberts Not “That Kind” of Christian
"nice article."
Brandon Roberts Talking Sex with Invisibilia’s Hanna Rosin
"Thanks for a fun romp. As a Presbyterian minister, I would have welcomed you gladly ..."
Zeigler John Leaving A-Holiness Behind
"Dear Sarah and Christian,I'm sorry for what has happened to you and your mother and ..."
Amazingaljicrowley3679 Letter From a “Demon Possessed” Woman
Browse Our Archives
get the latest from
Progressive Christian
Sign up for our newsletter
POPULAR AT PATHEOS Progressive Christian
1