Tales of a Male “Preacher’s Wife”

(This is excerpted from my full article featured this month in Sojourners Magazine and on the Sojourners website.) 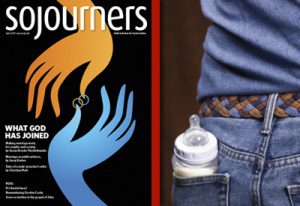 MY WIFE IS a pastor. Specifically, she’s the senior pastor of a prominent church in downtown Portland, Ore. I’m on staff too, but only part-time, and she enjoys telling people she’s my boss. Technically, I answer to the church board, but people get a laugh about the reversal of “typical roles.”

I get my share of “preacher’s wife” jokes, to which I have a handful of rote responses. No, I don’t knit or make casseroles. No, I don’t play in the bell choir. Generally, the jokes are pretty gentle, but they all point to the reality that few of us will actually talk about: We see the traditional roles of women as less important than those of their male counterparts. And so, to see a man who works from home most of the time and takes the kids to school while his wife has the “high power” job brings everything from the man’s masculinity to his ambition into question.

But regardless of the teasing I get, Amy has it a lot worse. One time, when she was guest preaching at a church in Colorado, a tall man who appeared to be in his 60s came up to her after worship. “That was pretty good,” he said, smiling but not extending his hand, “for a girl.”

Amy and I planted a church in southern Colorado 10 years ago, and we actually kind of enjoyed watching people’s expectations get turned on end when they met us. A newcomer would walk in the doors of the church and almost always walk up to me and start asking questions about our congregation.

“Oh, you’re looking for the person in charge,” I’d say. “She’s over there.” Then would come the dropped jaws and the wordless stammers as they reconfigure everything they assumed walking through the door. Amy’s even had people stand up and walk out in the middle of worship when they realize she’s about to preach.

SEX, FAITH, AND power have been long-time, if not always productive, bedfellows within organized religion. And from what I’ve seen as a “preacher’s wife,” Christianity is at least a generation behind the rest of the United States in figuring out our respective roles and limitations…

To read the rest of the article, visit this link on the Sojourners website, or check out the June issue of Sojourners Magazine.

May 16, 2013 The Absurdity of Legislating Sexual Morality
Recent Comments
9 Comments | Leave a Comment
Browse Our Archives
Follow Us!