A thousand things ran through my mind when the news broke Saturday night about George Zimmerman’s acquittal. I was in a bar, meeting a few ministry friends for a drink when the banner ran across the TV screens in bold, red letters. The moment was particularly profound, since I’m not only in Florida, very near where Trayvon Martin lived and was killed, but I’m also attending a church convention which is sharing space with the annual NAACP gathering.

Everyone in the room fell silent, black and white in equal numbers. It was hard to tell if this was the quiet of mournful reflection, or more like the pause just before two boxers pound each other into unconsciousness. We looked around at each other, then down, and then gradually the murmurs of conversation began to return.

Over the next twenty-four hours I heard people voice many of the same questions I wrestled with inside my own head:

Should say something? What? And to whom?

Where is God in all of this?

And then I heard about Sarah Lund, regional minister for the United Church of Christ in this area, who took these questions to heart and decided that what she needed to do was go to the epicenter of the woundedness and see what God might have her do. So on Sunday morning, she got up early and drove down to Allen Chapel, also known as the church home of Trayvon Martin and his family.

Since Trayvon’s death, the congregation and their pastor, Rev. Valerie Houston, have been tireless in hosting and facilitating community dialogues and

prayer vigils, with the hope of offering some opportunity for healing, discernment and hope in an otherwise tragic situation.  Sarah had read about Rev. Houston’s work, and it was in part Houston’s persistence in calling for peace that emboldened Sarah to make the trip to her church.

Suffice it to say that she was easy to spot, being the only white face in the building, apart from the swarm of media, panting for a quote, just outside. So Sarah took a deep breath and walked directly up to Rev. Houston. She introduced herself as fellow clergy, and explained that she had felt called to worship with them today.

The pastor thanked Sarah for coming and, with a smile, explained that her presence that day was providential. And then she asked her to speak during the service. She had nothing planned, and the moment seemed far too sacred for offhand comments, but she steeled herself and joined Houston at the front of the church.

Houston and Lund had far more differences than race. Rev. Lund is part of a Christian denomination that vocally supports the full inclusion of members of the LGBT community; Rev. Houston comes from a traditionally far more conservative denomination called the African Methodist Episcopal Church (AME).  But both felt the sting of the Zimmerman verdict, and both felt called to do something to mend the brokenness Trayvon Martin’s death had yielded in the community.

The service began with a candle lighting, in memory of the young boy who had been lost. Sarah explained later to me that some within the African-American community there saw Martin as a martyr for the injustice in the American law enforcement and legal systems.  When she talked about the liturgical dance that followed, Sarah’s voice began to shake with emotion.

“It was incredible,” she said, “seeing someone take on so much of a group’s pain and anger, and turn it into something beautiful.” She was invited to the pulpit following a passionate sermon offered by Pastor Houston, though she still wasn’t entirely sure what words would come.

“You may wonder why a white girl like me is up here,” she said, to a stirring of laughter. “But as Dr. King said in his letter from the Birmingham Jail, ‘injustice anywhere is a threat to justice everywhere.’” She went on to explain that the pain that burdened them was her pain too, and that she felt compelled by God to face it with them.

Sarah could see the fear in the eyes of the youth in attendance, many of whom had been calling the church since the verdict, worried about whether it was safe for them even to go outside. She saw the pain in the face of every mother and father, most of who would find even the idea of losing a son nearly unbearable. And she saw the conviction and grace of Pastor Houston standing alongside her, affirming her courage and call for a greater sense of justice.

The congregation rose to their feet in applause, enfolding Sarah with the warmth of a family whose differences hold no sway when compared with their love for one another. And following a song of celebration, Pastor Houston felt inspired to offer an altar call. Three of the youth joined her in the front, pledging their lives to the walk of a Christ-like path of peace, and to be immersed in the waters of baptism as a symbol of death to old ways of living, being reborn into something new, something holy, but as yet not entirely seen.

And then came the seven-year-old boy who, Pastor Houston later explained, came up for a blessing every week during the altar call, entirely on his own. But that day, instead of a simple blessing, Rev. Houston said that she felt compelled to offer him a special blessing as a prophet of Christ’s Gospel message. He was their hope, the embodiment of the Good News they preached.

Yes, he was only seven, but she saw God’s spark in him, Houston said, and it needed tending. There was no time to waste. 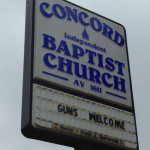 July 18, 2013 Is Church Still a Curator of Culture?
Recent Comments
2 Comments | Leave a Comment
Browse Our Archives
Follow Us!