Ever since the most recent Video Music Awards show aired, there has been a breathless competition online to see who can be more offended by Miley Cyrus’ highly sexualized performance.  Yes, I watched it, and yes, much of it made me pretty uncomfortable. It was hard for me not to imagine my own daughter a dozen or so years from now, longing to replicate the gyrations and sexual gestures of another – but similarly overt – pop idol.

Basically, it was lowest-common-denominator entertainment: hardly anything new in the music industry.  Madonna did as much and then some decades ago, so why is this particular incident such a big deal?

For one thing, one of the most lurid moments of the performance had her grinding in a compromising position with a married man, nearly twice her age.  Interesting, though, that the criticisms of Miley online have far outweighed those of Robin Thicke, the married man in question who participated in said grinding.  Suffice it to say that women historically have been held to different standards of sexual expression than men, and when in doubt, blame the woman. Not that her dance was appropriate, but it tells us more about ourselves when we obsess about the shenanigans of the young woman far more than the borderline adulterous displays of a much older man.

Second, Miley’s childhood and the resulting fame that came with it was branded as fundamentally wholesome. Her father, Billy Ray Cyrus, is a bit of a Christian public figure himself  and is an active member of Parents Television Council, an advocacy group that is somewhat of a moral watchdog for the media. So there’s no small irony in his own daughter being the poster child for everything the Council stands against. Of course it’s really no surprise either, given historical precedent of kids rebelling against the mold created for them by their parents. It’s been going on at least since Biblical times, so why should they be any different now? Miley the child was sold as a sweet, spunky but wholesomely innocent youngster, so of course, as she seeks to assert her individuality, she’s going to shatter that image to bits.

Third, there’s the matter of her being one of the biggest Disney icons in recent years. Disney is quite intentional about creating an image of “wholesomeness” around their brand. But let’s be honest; they are not above sexualizing their child actors when it suits them, either. This became strikingly clear to me when my son, now nine, was watching an episode of iCarly a few years back and Miranda Cosgrove, who couldn’t have been more than in her early teens at the time, was bouncing around through the show in a coconut bra.

Just this week, my four-year-old daughter, Zoe turned on the Disney Channel, only to be met with a laundry list they had compiled of things a “good princess” should always do. Among the top  items listed: kiss boys.

Which brings me to my final point about what Miley’s performance contributes to the feminist movement in North America. Although in some respects, women and girls have made strides toward gender parity in our culture, there is still a persistent, if sometimes subtle, subtext narrated to our girls, which is that sex is the most efficient and potent mean of access to power they have. Yes, my daughter is told now at such a young age that she can be anything she wants when she grows up. And I hope that is true, but I already hear the comments from friends, family members and teachers about her appearance and anticipated future success with boys, and how it affects her behavior. and honestly, it only gets more pronounced as girls reach puberty and beyond.

So perhaps, rather than men in power resisting the progress of women being the greatest current barrier to parity, it now is the unpleasant reality that sexualizing young women works for innumerable purposes in our world. None more so, perhaps, than the popular music industry. So it’s really a bit disingenuous of us to express shock or disgust when Miley Cyrus fondles herself or engages in orgiastic dance numbers in front of an audience of millions. After all, the culture set up the rules of the game long ago and, in spite of our assertions to the contrary, the economies of power, money and fame depend heavily on appealing to our baser instincts.

So judge Miley if you must, but in doing so, realize that she is only a speck that is part of a much larger log in our collective cultural eye.

September 4, 2013
We've Already Blown It in Syria
Next Post 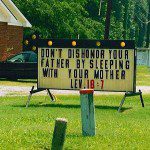 The Resurrection Will Not Be Televised
In the year 1970, The Last Poets and Gil Scott-Heron released a...
view all Progressive Christian blogs
What Are Your Thoughts?leave a comment
Copyright 2008-2020, Patheos. All rights reserved.