(Special thanks to my wife, Rev. Amy Piatt, for her collaboration on this entry with me.)

The following is excerpted from my Heretic’s Guide to the Bible weekly study. To read more or join the study, CLICK HERE or on the banners above or below.

Situation comedies are the worst. You know the ones; they’re always thirty minutes long, usually filmed on a soundstage with a live audience, and the worn out pre-recorded laugh track in the background to let you know when something is supposed to be funny. They’ve gotten better in recent years, but most of them still seem to recreate the same tired scenarios over and over again.

One of my least favorite situations is when a character gets caught up in a hopelessly compromising position, only to have his significant other walk in at the absolute worst time. “It’s not what you think!” he says, inevitably, although we all know it is precisely what she thinks. In my most recent lectionary texts, we have a lot of these kinds of situations.

We seem to have a pattern going on, wherein people will assume things are one way, and then God (or one of God’s emissaries) suggests it’s not actually as it appears to be. With the people of Israel and Judah, they’ve been dominated by the Assyrians, scattered to the four corners, and now the Babylonians are threatening. But despite what seems to be an impossible situation, Jeremiah assures them that God will restore them and all that is theirs.

Zechariah and Elizabeth are sure their chances for childbearing are dried up and – POOF – she’s pregnant. David’s psalm recalls the many times God has remained faithful when prospects were dim, and Paul assures the church in Colossus that they’re looked after. It’s actually a great theme to help us prepare for Advent. Something is coming.

Things in nature may be in retreat, the days getting shorter. We may seem to be shrouded in darkness, and yet, I bring Good News of great joy…

The thing we have to be careful about, when it comes to God, is cashing in one existing set of assumptions for another. Yes, we may see no way out of a situation, but that also doesn’t mean just because we pray, that God will magically make everything go our way. Just like we read in last week’s gospel text, Jesus reminds his followers that, fro their faithfulness they’ll be jailed, abandoned, persecuted, tortured and even killed. What a blessing, right?

But In holding fast to our faith that God is in all things, even the bad things, we can begin to see glimmers of hope, wisdom and growth in the most miserable circumstances. We begin to be able to imagine what the world might look like if the brokenness and suffering were, once and for all, transcended. We can start to share with others this inspired vision that calls us toward a reality far greater than the present circumstances. Will it turn out the way we want? Maybe, and maybe not.

Jesus certainly wasn’t what lots of people expected or wanted. But advent is a time of expectancy, rather than expectation. One is hope-filled, open to mystery and possibility, while the other is dead-set on a particular outcome. Time and again, people don’t get what they want in the Bible, and yet things tend to turn out as they should.

So for this coming advent season, let’s try to replace some of our many expectations with the more open-ended expectancy that asks, “What’s next?”

Then, let’s go forward and find out together. 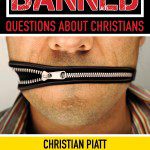 November 19, 2013
Banned Questions About Christians: The Questions
Next Post

November 22, 2013 Behavior Modification for Social Justice?
Recent Comments
3 Comments | Leave a Comment
"nice article."
Brandon Roberts Talking Sex with Invisibilia’s Hanna Rosin
"Thanks for a fun romp. As a Presbyterian minister, I would have welcomed you gladly ..."
Zeigler John Leaving A-Holiness Behind
"Dear Sarah and Christian,I'm sorry for what has happened to you and your mother and ..."
Alejandro Restrepo Letter From a “Demon Possessed” Woman
"This blog is dated March 2016. It wasn't that good then and it's no better ..."
Bob Shiloh Five Ways “Representative Democracy” is Failing ..."
Browse Our Archives
get the latest from
Progressive Christian
Sign up for our newsletter
POPULAR AT PATHEOS Progressive Christian
1