I will be concluding my Heretic’s Guide to the Bible weekly online study at the end of this calendar year. But while I’m still at it, I figured I’d share a sample from the study for this week.

First Reading
Isaiah 11:1-10
The prophet offers a vision of hope to the people of Israel, who are under siege by the Assyrian army. In his future vision, humanity and the rest of creation are all woven together into a single tapestry of creation. There is a new order established, a promise of new growth and of stability and peace.

Psalm
Psalm 72:1-7, 18-19
A prayer for the welfare of the people’s king (not sure which one based on the Psalm’s context), and for welfare, peace and stability for the people over whom he presides. The psalm ends with an offering of praise and thanks to God for providing these things to the ruler.

Second reading
Romans 15:4-13
Paul assures the Christians in Rome that the ancient holy texts contain wisdom necessary for their spiritual growth today. He also affirms that Jesus is the one who came to ensure that the promises offered by the ancients is a promise fulfilled today. He reiterates the scripture from Isaiah above, suggesting that the same vision can and will be realized for Christ’s faithful.

Gospel
Matthew 3:1-12
John the Baptist is introduced on the scene, preaching repentance and baptizing people In the river Jordan. When the Pharisees and Sadducees come to be baptized them, he criticizes them, saying that being descended of Abraham is not enough; they have to come to baptism with a repentant heart. He also notes that this baptism by water is merely symbolic, and that the One who follows him will baptize with fire and the Holy Spirit.

This week has a lot to do with us following the right leader, and with those leaders being right with God. Paul is concerned with making sure folks understand that what has taken place is the fulfillment of prophecy from their ancient texts. This is it, he’s saying. Don’t miss it. In the psalm, if we presume the psalmist is writing about King David, he was also of the lineage of Abraham, and later of Jesus.

So all of the first three texts are kind of connected. And then John the Baptist comes along and blows it all up. He criticizes those who lay claim to the lineage of Abraham and David and lean on that as justification for their righteousness in the eyes of God. It’s not where your blood came from that matters, but rather the key is the desire to change in your heart.

From this early on, we can see how John might have landed himself in jail. First he denies baptism, which he offers other common people, to the elite religious order. Then he says that the whole basis for their legitimacy as religious rulers is irrelevant.

There’s another important theme throughout these texts, and that is the pattern of where they point. Isaiah points away from the present suffering and toward both God and Abraham’s descendants. Don’t get too focused on what’s right in front of you, he says. There’s something bigger going on.

Similarly, the psalmist is praying on behalf of the king, Paul is pointing people toward the ancient texts and toward Jesus as the fulfillment of the promises within them. Finally John points attention away from himself and toward one which he hasn’t even met yet, though he believes with all his heart is coming soon.

Perhaps the greatest wisdom we can gain from these scriptures is what is fundamental to the nature of a prophet. Do they point toward themselves, seeking aggrandizement, admiration or influence because of their own wisdom? Or do they use their particular gifts of vision to redirect the gaze of others toward something beyond their present vision?

Not exactly the archetypal description of an American politician, is it? Maybe this is why, no matter the promises they offer us, and no matter how great their speeches are, we end up feeling let down. Because if all roads ultimately begin and end with them rather than leading to something bigger than all of us, we’re bound to be disappointed. 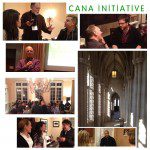 December 5, 2013
CANA, The Gathering: Discerning a Progressive Identity
Next Post