Five Reasons We Take Our Kids to Gay Pride 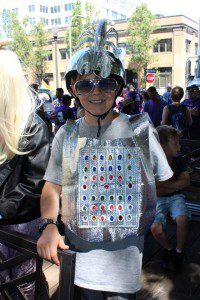 The Gay Pride parade in Portland, Oregon is not only a family-friendly event; it’s a community-wide celebration. From airlines, banks and restaurants to the SPCA and churches, lots of people get involved with floats, costumes and displays at the end of the parade route. There are kids there, both of straight couples and same-sex couples.

And our kids don’t just go; they’re on our church’s float. Every year. Here’s why:

1. They need to learn that the world is big and diverse. We all want to protect our kids from things that will harm them or that they’re not yet prepared to handle intellectually or emotionally. But though we can talk about diversity, pluralism and inclusion all we want, it rings pretty hollow until we experience it. Sometimes our kids need to be put in a space where they will be intentionally a little bit out of their comfort zone, where they will have questions, be unsure of what the cultural norms are and how or why people express themselves the way that they do. It helps them realize they’re not the centers of the universe, and it helps them develop the necessary empathy and compassion to be more responsible citizens in our broader community. 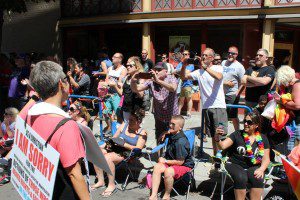 2. They need to know what a lot of people really think of Christians. If the only experience they have representing themselves as members of a Christian community is within the walls of church, they’re not getting a very realistic understanding of what it means to be a person of faith in today’s world. Whereas not so long ago it was considered the norm or “default” to be a Christian in our culture, now we are met with cool reserve, skepticism or even anger. They need to know this, and they need to know why. A lot of people have been hurt in the name of our faith, and as people who are a part of that faith, they need to become familiar with the subtext of the cultural narrative around it, and not just within it.

3. They need to know how some people – especially Christians – still treat LGBTQ people. Inevitably every year the protesters come out for Pride, even in Portland. They stand curbside with their bullhorns, their banners filled with hate and condemnation and visceral anger on their lips. My six-year-old daughter, who has learned to read well this year, asked us along the 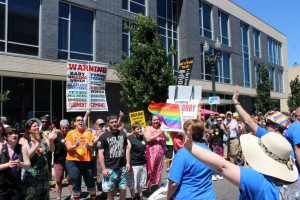 parade route why they had banners that said we loved hell and the devil. We explained that some people are afraid of difference, and that their instinct is to label things that our different as evil and bad. But then we remind her that we are called by Jesus to respond to such hatred with love. And we showed them too. We walked over in front of the protesters, and despite their assertions to the contrary, we reminded them that we loved them, just like we loved out LGBTQ sisters and brothers. It may not have sunk in for them, but if my kids heard it and learned from the example, it was well worth it.

4. They need to see people loving each other and expressing community in different ways. The greatest risk if we don’t expose our kids to different realities is that they’ll end up acting out much like the protesters do. They’ll see difference not as an opportunity to learn and grow, but as 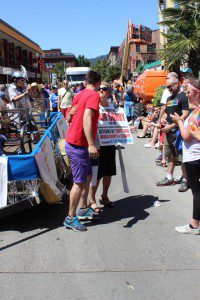 a threat to be avoided, or even eliminated. And there’s always the possibility that they will feel called to love differently than we do, or that they identify differently than we do, and we want them to know that different doesn’t equal wrong. We teach them the same thing we try to communicate at our church, which is that we believe God cares less about who we love, and more about how we love.

5. They need to learn humility. One of the most common critiques of Christians is that we are arrogant, judgmental, and that we don’t practice what we preach. We claim to follow Jesus, who walked the path of humility and compassion, and yet all too often we’re not compared with him in the eyes of the world. One of the most important things we do at the parade every year is carry sings that read: AS A CHRISTIAN I AM SORRY FOR THE NARROW-MINDED, JUDGMENTAL, DECEPTIVE, 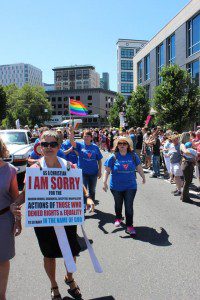 MANIPULATIVE ACTIONS OF THOSE WHO DENIED RIGHTS AND EQUALITY IN THE NAME OF GOD. My wife, Amy, who also is the pastor of our church, keeps the signs in her office window all year round too. It’s amazing how many people stop to take pictures of it, give us hugs, share their story or simply to thank us for a simple apology. It should never be remarkable or newsworthy that Christians are acting out of humility and seeking reconciliation. But until it isn’t, we’ll keep doing it, and God willing, our kids will follow in the path we’re helping make for them. 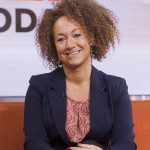 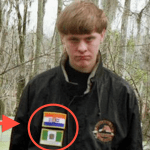 June 18, 2015 Charleston Church Shooting: The Danger of "All Are Welcome"
Recent Comments
0 | Leave a Comment
Browse Our Archives
Follow Us!