Companions on the Road to God Experience Doubt, Mystery and Redemption Together

Companions on the Road to God Experience Doubt, Mystery and Redemption Together March 18, 2013 Tony Rossi 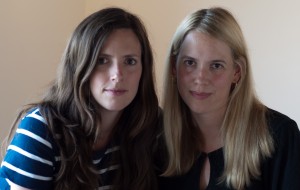 So a rationalist and a mystic walk into a bar.

Okay, it wasn’t a bar; they walked into a writing class.

That’s not the opening of some weird, existentialist joke. It’s the way a life-changing bond was formed between two talented young writers whose personal and spiritual journeys – told in the new book “Love and Salt: A Spiritual Friendship Shared in Letters” – offer the kind of relevant, relatable, theologically-rich stories that help them follow in the footsteps of their literary and religious role model, St. Teresa of Avila.

When Amy Andrews (the rationalist) and Jessica Mesman Griffith (the mystic) met in a writing course, they each had different religious experiences in their pasts. Amy grew up with an agnostic mother and atheist father, yet she’d always felt naturally drawn to God. And though her parents weren’t believers at the time (they’ve since converted), they held to a lot of the values of Christianity without actually practicing the faith.

Jessica was raised Catholic in southern Louisiana and surrounded by the overt religious practices native to the region. When her mother developed a terminal illness, her parents defected to an evangelical church in search of a healing miracle that never came. Jessica’s father became vehemently anti-Catholic, so she grieved both the loss of her mother and the loss of her childhood faith.

Yet the soulprints of Catholicism never really left Jessica, so despite traveling a winding religious road, she returned to the Church when she got older.

Finding God in the Words

Amy indulged her inclinations toward God by becoming a born again Christian while in college, but there were elements of that system of belief and worship that kept her from fully embracing it.

One of those elements conflicted with Amy’s natural love of literature and writing. She told me on Christopher Closeup, “When I was trying to become a Christian in college…the group that I was in contact with was very afraid of secular things. That’s not my experience in Catholicism at all. I feel like the Catholic Church – maybe because of how ancient it is – is much more secure in itself and it’s able to look at secular references. I think God is everywhere, so of course I love reading theology, but it’s not like that’s the only place you can see God.”

Jessica had a similar experience, saying, “I was reading so widely at the time because I was in graduate school in a writing program. Reading theology and the Bible alongside all of these other great works of literature, all of it seemed to be pointing in the same direction – the Church.”

Following those literary lines, it was Amy’s desire to enter into the “story” of Christianity that eventually led her to the Catholic Church.

She said, “I think part of it was getting married. I realized that you can’t know something one hundred percent ahead of time. You have to do it. Then you have the transformation and knowledge that come from actually being married. With that example, I started to think about faith in the same way – that this was not a matter of knowing everything ahead of time; it was a matter of entering a story. And the story had become so beautiful and so true and so desirable to me that I thought, ‘This is as much as I’m going to be able to know from the outside. What I need to do now is enter the story and see what happens.'”

Entering into the rituals and traditions of practicing the faith was also a boon for Jessica, especially on days when she didn’t feel connected to God. She said, “Going through the motions and rote prayer, these things were very helpful to me because on days when I could not come up with the language to talk to God, the words were there for me in beautiful, ancient prayers. Those things were essential to me – that I have something to lean upon, to fall into and hold me up on days when I don’t necessarily have the faith myself.”

When Amy and Jessica met, they found an ideal complementary friendship for where they were in their lives. Jessica agreed to be Amy’s sponsor into the Catholic Church, and they decided to write daily letters to each other as a Lenten discipline that could help them work out their beliefs on paper.

They both came to appreciate the Church’s rich traditions, but also realized how modern and relevant its history was, especially when they encountered the writings of St. Teresa of Avila.

Jessica said, “I was so shocked to find writing by a saint that didn’t seem to be dripping in piety and sentiment, that she had a great sense of humor. She was very bold and almost adventurous. She seemed very modern to me. I related to her instantly.”

Ironically, Amy the rationalist grew to love the mystery that was at the heart of the Catholic Church. She said, “One of the things that I find so beautiful about mystery and paradox is that they are not resolvable into these easy answers that can reduce all of experience into one thing. All of experience cannot be one thing. What we have at the center of our faith is a person. A person is not resolvable into a single idea.”

Of course, the unexplained can also lead to doubt. But Amy saw that as a good thing: “It was helpful to find doubt actually occupying a place in Catholicism because in my prior model of conversion, doubt signified that you had not managed to convert in the right way, that you had fallen away from God, that you were no longer on the path. To see doubt as part of the process, as a necessary companion on the road to God, was immensely helpful. Of course, doubt doesn’t go away. It’s always there, it’s the flip side of faith…It makes us aware of our longing for God.”

For Jessica, one of the biggest reasons she returned to the Church was the fact that we have a suffering savior. Specifically, the Way of the Cross helped her deal with the losses she’d endured in her life.

Jessica said, “I needed to acknowledge death, to acknowledge that suffering was a reality and something I had endured. I wasn’t getting that from the churches I had been in during my high school years with my family….I needed a way to feel that this story was not over with my mother and the other people we had lost – that we were going to be able to have some connection with them. It’s not something we’re waiting for, it’s not something that’s going to happen when we die. It’s something that we have access to right now. There’s not a wall between us and heaven. It’s much more permeable than we might believe.”

The challenge of dealing with death became a painful reality for Amy and her husband when their baby died. She recalled, “I felt empty, like the hopes of my marriage, the hopes my parents had for me, the plans I had for my own life – everything was gone, and I was grieving this person.”

Thankfully, Amy found hope and consolation through her church community and friendship with Jessica: “Seeing Jess beside me, weeping when I was weeping, was more comforting than almost anything else. That’s the incarnational nature of our faith. I was seeing God suffering through her, and that absolutely lightened my burden. It didn’t make it go away, but it redeemed it.”

Life is About the Journey AND the Destination 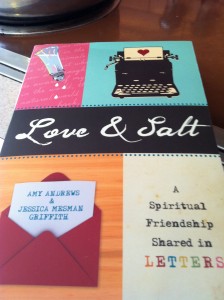 As they chronicle in “Love and Salt,” Amy and Jessica have traveled a rewarding, profound, difficult road together, and they know their successes and stumbles through life will continue, like they do for everybody. They’re firmly committed to keeping their endpoint in sight, however.

As Amy explained, “The reason I think it’s unsatisfying to say [life is] all about the journey is that you don’t recognize that we, as Christians, believe in a destination. We believe that we are headed for union with God in eternity. It’s not that I don’t think the journey’s important – I absolutely do. It’s just that it’s a journey with a specific destination in mind that then casts meaning back on the rest of life… If we just say it’s all about the journey, we’re lying to ourselves…There is something coming that is helping us make sense of what we are doing as we’re walking down the road.”

March 14, 2013
A Humble, Humorous, Prayerful Pope's First Day on the Job
Next Post

Another Word on the Tragedy of...
Steel Magnificat
Related posts from Christopher Closeup