‘We’re All Sick Pilgrims Drifting Toward God, Whether We Realize It or Not’ 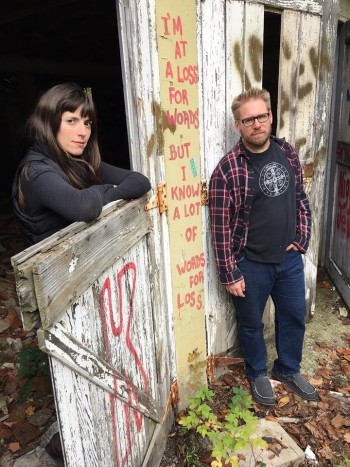 What do a monk, a high school student, and a tattooed Krav Maga instructor have in common?

Griffith and Ryan are the founders of a Patheos blog called “Sick Pilgrim,” and they want it to be a home for Catholics (and non-Catholics) who don’t fit into an obvious Church niche.

During a “Christopher Closeup” interview, Jessica explained, “We’re all pilgrims drifting towards God, whether we realize it or not…There’s a lot of people out there who are suffering, who are lonely, who are depressed, have life-threatening illnesses, or terrible situations in their marriages. Those people need a place in the Church, and we kept thinking of the great line about the Church being the hospital for sinners. How often is that reflected in our parish life?…We’re hoping to be a gateway for them, where they can join this community, find companionship and a little bit of healing, and then send them on their way to the parish for their sacraments and for the deeper life they can find there.”

This is where the monk, high school student, and tattooed Krav Maga instructor come in. One of Sick Pilgrim’s initiatives has been an online community that prays together nightly on Facebook Live. Throughout the day, a diverse group of people post their intentions, doubts, struggles, and challenges. “Then at night,” says Jessica, “we’re logging on and you see our faces as we pray. It’s been a powerful experience for all of us.”

On the Road Again

Jessica and Jonathan’s focus on doubts and struggles comes from a personal place. When they created Sick Pilgrim, Jessica was enduring a major depression, while Jonathan was going through a divorce. In addition, they’d both traveled winding roads away from – and eventually back to – the Catholic Church.

Jonathan was in sixth grade when his parents left the Church. He went on to become a Presbyterian minister and earn a Masters of Divinity degree. But as a result of reading a lot of science and theology books because of his work with atheists and agnostics, he came to see, “Catholicism just made much more sense. And at that time in my life – going through a divorce and being in the emotional space where I was broken and distraught – it really came down to the presence of Christ in the Eucharist. That brought me back into the Church. That mysticism, combined with this raw physicality and Catholic realism, is what influences how I practice faith now.”

For Jessica, who grew up Catholic in New Orleans, her father left the Church when she was 13 and became a “fundamentalist type of evangelical” that despised all things Catholic. That experience, coupled with the death of her mother, “was pretty destructive for me as a teenager,” she said. “I left the faith for a long time, not by choice, and felt homeless…[But} I could never really give up on Jesus, and I thank God for that.”

Jessica notes that she always had “a Catholic imagination and a Catholic soul,” so when she was in an MFA program for creative writing, she read works of literature that, while not necessarily theological, “echoed my search for Christ. These are the books that led me back to the Church, all these works of art that are hungry for truth and beauty. It wasn’t until I went back to a Catholic Church that I had this tremendous sigh of relief that, for better or worse, this is my home…and this sort-of pilgrim journey towards my eternal home.”

‘Syllables of the Perfect Word’

In light of both Jessica and Jonathan’s literary backgrounds, they are organizing a writer’s conference that will take place at Notre Dame from June 22nd to June 24th, 2017. It’s called “Trying to Say God: Re-Enchanting the Catholic Literary Imagination.”

Jessica said, “We sensed a real frustration about the lack of high quality Catholic and literary writing, and the loss of the Catholic imagination…Even devotional writing, which I do for a living, is denigrated by higher literary circles. We want to [inspire] literary devotional writing that is beautiful and artistic, like Caryll Houselander, like those great books that we all love reading from the 40s and 50s that Sheed and Ward published.”

In addition, Jessica and Jonathan also want to be more embracing of popular culture. As a paranormal fiction writer, Jonathan is a big fan of best-selling novelist Dean Koontz, who infuses Catholic values into his thrillers. And Jessica hopes their conference draws in everyone from genre writers to cookbook writers to mommy bloggers. As a result of this “big tent” approach, two of the keynote speakers will be Catholic convert and best-selling author Mary Karr – and sci-fi fantasy writer Tim Powers. More information about the conference can be found at the link.

A Repository of Mystery

Part of Sick Pilgrim’s appeal to artists is that the site embraces the concept of mystery. Jonathan, who also writes for Protestant publications, says, “I think the sacramental idea in the Catholic Church is something that Protestants are really starting to pick up. Too often, we think, ‘Here’s the real world, the concrete world – and here’s the unseen world, which is not real.’ The Creed and the Catholic faith say otherwise. There’s the concrete real world and the concrete unseen world – and the sacramental is in-between those two things, one leading to the other, leading to the other.”

Jessica adds that she, too, has seen a “hunger” among Protestants for this idea of “enchantment,” as it’s called. “We live in a disenchanted, secular world, and we’ve lost the enchantment of a world guided by Christianity. We’re struggling [to get it back], except not in the Catholic Church because we still have it. We’re in danger of losing it…But the Catholic faith, in all its authenticity and truth, has not lost that enchanted worldview. I think that’s what’s really appealing to the artists and writers looking at our blog, who may not yet be Catholic or who have fallen away from the faith. They see that it is the repository of that mystery, and they’re drawn to it.”

Can Men and Women Be Spiritual Friends?

Another thing the Sick Pilgrim online community is drawn to is spiritual friendship. In fact, that was the topic of Jessica’s Christopher Award-winning book with Amy Andrews, entitled “Love and Salt: A Spiritual Friendship Shared in Letters.”

She said, “I think that we’ve become so shunted off into our little corners, we seek community online and often don’t find it in meaningful ways. Sick Pilgrim [has] evolved into this place where people are making those kinds of friendships. We’re watching people around the country come together, scheduling meet ups, going to Mass together, going to dinner together. All of this work grew out of ‘Love and Salt,’ where that experience of writing that book and having that friendship was such an epiphany for me, that God comes to us and tends us through the hands of others. And we need those hands!”

While spiritual friendship might seem to be a feminine topic (most requests for the Christopher News Note “Building Spiritual Friendships” come from women), the Sick Pilgrim community is defying gender stereotypes.

Jonathan, a self-described “Midwest lumberjack dude [who] loves sports as much as I love Jane Austen,” admits that men often have the mindset “I can do it on my own,” grounded in male pride: “In my own life, I’ve been hurt, so my inclination is to keep those walls up, to keep the sin of pride as a buffer between my friends and people who are around me. I think Sick Pilgrim has broken down those walls for me. But I’ve also seen it in the group. We have tons of guys in the group.”

Friendships have developed between men and women – and between certain men. Jonathan said, “I think it comes back to the initial core friendship with Jess and I. We’re modeling this chaste, spiritual friendship that’s been a beautiful thing in both our lives.”

If there’s one thing that Jessica and Jonathan are fundamentally trying to do with Sick Pilgrim, it’s bring light to the darkness. Jonathan was particularly inspired by a song from Canadian folk artist Bruce Cockburn called “Kick the Darkness.” One lyric is, “Kick the darkness until it bleeds light.”

Jonathan explained, “We are kicking the darkness. We’re not glorying in it, but we’re also recognizing that it’s a reality in a lot of people’s lives. So instead of lamenting it, we’re trying to kick it until it starts bleeding light.”

Sometimes the problem in Christian churches and communities is that they believe they have to put on a happy face no matter what. Jessica strongly disagrees with that approach to faith and started a blog feature called Dark Devotional because of it.

She said, “It’s fundamentally dishonest to pretend that there is not darkness in our lives or in Christianity or Catholicism. We have a body on the cross, and it’s there every Sunday at Mass. To have what Barbara Brown Taylor called ‘full solar Christianity,’ where we cannot face the darkness, is not a true Christianity. It doesn’t speak to my life experience in which I’ve endured so much suffering already. I need a faith that can handle and hold that suffering, yet help me to see better in that darkness.”

Jessica concluded, “What do we have to offer people when they are experiencing affliction and extreme suffering? When your baby has died? When you’re burying your child? When your marriage is ending in a complete disaster? There are times when we just need to sit together in that darkness and let God move, to not try to move too quickly into the light or into some platitude [like], ‘God never closes a door without opening a window.’ That can be deeply hurtful to someone who’s experiencing spiritual abandonment and agony. I want to create that space, too, where if you’re not ready to move out into the light, let me sit with you there in the darkness for a while and maybe I can bring that light to you if you can’t find it yourself.”

(To listen to my full two-part interview with Jessica Mesman Griffith and Jonathan Ryan, click on the podcast links below.)