Jimmy Kimmel Deserves an Emmy For His Job Hosting the Oscars 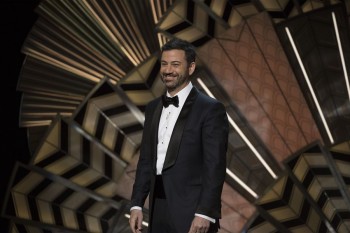 Thanks to Jimmy Kimmel, last night’s Oscars was the most entertaining, least boring ceremony I’ve seen in recent memory. Yes, his comedy bits made the show run long (as it usually does anyway), but they also injected energy and humor into the parts of the evening that often feel sleep-inducing for viewers at home.

First, there was Kimmel’s opening monologue, which, of course, got political. But it was more in the pointed-but-lighthearted Johnny Carson vein than the angry, bitter political humor that’s prevalent today. Example: “Of all the great actors here in Hollywood, one in particular has stood the test of time for her uninspiring and overrated performances. Mediocre, underwhelming, Meryl Streep has phoned it in for over 50 films over the course of her lackluster career. Would everyone please join me in giving Meryl Streep a totally undeserved round of applause.”

While Kimmel made jokes at the president’s expense (though I think he made more at Matt Damon’s expense), he didn’t spare Hollywood either. One of the criticisms of the Academy Awards is that it’s full of self-important celebrities who think of themselves as morally superior to various other groups of people. Kimmel pointed out the hypocrisy in their approach with the joke, “Here in Hollywood, we don’t discriminate based on race or what country you’re from. We discriminate based on age and weight.”

Kimmel also made a plea for liberals and conservatives to start talking to each other and getting to know each other as human beings: “There are millions and millions of people watching right now and, if every one of you took a minute to reach out to one person you disagree with, someone you like, and have one positive, considerate conversation, not as liberals or conservatives, but as Americans, if we could all do that we could make America great again. It starts with us.”

While this was quickly followed by a Matt Damon joke, he did sound genuine in his intent to create a little more understanding between two groups who often dismiss or dehumanize each other.

The other thing Kimmel did well is break down the wall between celebrities and ordinary people. As much as actors and actresses like to promote the idea that they’re just like us, their day-to-day lives can be very different from your average Joe and Jane. Or in this case, Gary and Vicki.

Kimmel had a busload of Hollywood tourists (including Gary and Vicki from Chicago) brought into the Oscars during the ceremony, thinking they would be visiting a fashion exhibit. Instead, he brought them down the aisle of the Dolby Theater and walked them past all the celebrity nominees in the front row, encouraging them to shake hands and greet whoever they wanted. While this section went on a tad long, it was great fun seeing tourists – some of whom made the most of the moment, while others looked deer-in-the-headlights surprised – greeting and taking selfies with the likes of Meryl Streep and Denzel Washington.

I also enjoyed the parts where Kimmel had candy fall from the Kodak Theater ceiling via mini-parachutes so that the celebrities and nominees could enjoy the show like normal people would in a theater.

During the show, Kimmel jokingly remarked that Viola Davis’s acceptance speech was so poignant that it immediately got nominated for an Emmy. From my perspective, it’s Kimmel himself who deserves an Emmy nom for being the kind of host who kept us laughing, even during the somewhat-uncomfortable ending in which the wrong winner was announced. Hosting the Oscars has a unique set of challenges, and Kimmel handled them well. He deserves a pat on the back.

February 14, 2017
Bringing the Future to Hope Valley: A Look at "When Calls the Heart's" Season Four Premiere
Next Post