Bringing the Future to Hope Valley: A Look at “When Calls the Heart’s” Season Four Premiere 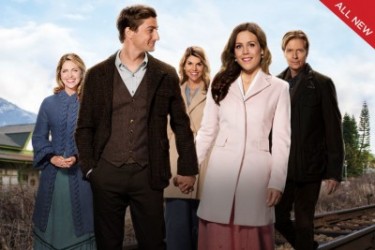 Progress is generally thought of as a good and necessary thing for a society to grow and prosper. But it can also present some challenges when change happens quickly and makes it a possibility that some of the best parts of the past might be lost in the process. There’s a tension between “progressing” and “conserving.”

That’s a tension the citizens of Hope Valley will experience as season 4 of the Christopher Award-winning series “When Calls the Heart” premieres on the Hallmark Channel on Sunday Feb. 19 at 9/8C.

As the episode begins, Spring is in full swing, and Director of Photography Michael Balfry, CSC, and Director Peter DeLuise do an outstanding job capturing the natural beauty of the landscape.

Abigail (Lori Loughlin), who has recently become the mayor, is finding that dealing with her fellow townsfolk’s complaints about loud chickens in the city limits and soot caused by burning grass is a lot more stressful than the occasional burnt pie in the cafe.

On a larger scale, Abigail is faced with a big decision for a novice mayor. A man named Ray Wyatt from the National Pacific Railroad arrives because his company wants to build a railroad depot in Hope Valley that would allow it to run through to the West Coast. “I’m here to bring the future to Hope Valley,” Wyatt declares. But Abigail insists in having a town meeting about this decision since it will directly impact everyone’s lives.

Elizabeth (Erin Krakow), meanwhile, is dealing with a school room that’s more crowded than it used to be because the settlers who lived nearby moved to town after the flood, which ended season three, devastated their makeshift camp and nearly killed Jack (Daniel Lissing).

The children prefer to sit with their existing friends in school, so Elizabeth starts thinking of ways for them to integrate better and get to know each other. Jack recalls, “When I was young, team sports was a great way for kids to make friends…Everyone likes winning. And you can’t win unless you all work together.”

Elizabeth agrees, and the two start planning a baseball game for which they’ll each coach one of the teams. Jack is comically skeptical that Elizabeth can pull it off, so this creates the friendly rivalry that drives their relationship through much of the episode.

At the town meeting about the railroad, the citizens voice their concerns, including issues about new people overwhelming the infirmary and also the possibility of a more rowdy crowd in town prone to starting fights. Abigail promises to address these issues and others. She even gets a compliment from former Mayor Gowen on how she handled herself. But as with all things Gowen-related, you can never quite tell when he’s being sincere or when he’s trying to play you. So which will it be in season four? I guess we’ll all have to stay tuned.

For Hearties (which is what the show’s fans call themselves in case you’re a “When Calls the Heart” newbie), season four begins by affirming everything they’ve always loved about the show – the emphasis on family, faith, and kindness – while moving the story and characters forward in new and interesting ways.

There’s a new student named Cyrus, for instance, who loves baseball, but refuses to play because of a leg injury he suffered after falling off a horse. His father tells Elizabeth that Cyrus should be healed by now, but fear of failure is holding him back. Elizabeth, once again proving that she is the epitome of the perfect teacher, encourages him by sharing a story from her own life and offering the message that everyone has a part to play in a team’s success.

Another welcome element in this episode is that there are plenty of laughs to keep things from getting too earnest. It shouldn’t be a surprise that many of them revolve around Rosemary, who insists on calling Lee a special nickname in public that irks him to no end. In turn, he comes up with a unique nickname for her that she is none too thrilled with either. The newlyweds eventually work it out, but it’s a fun ride getting there.

All the actors have settled into their characters as if playing them is second nature. Episode writer Charles Lazer does an excellent job here, both in terms of story and dialogue. And executive producers Brian Bird, Michael Landon Jr. and Brad Krevoy can be proud of this show they’ve created that offers ideal entertainment for families to watch together.

As Jack says at one point during the episode, “I thank God that I’ve been given the privilege to serve our community and our country.”

Fans will be thanking God that Hallmark Channel renewed “When Calls the Heart” for a fourth season – and praying that it gets a fifth season pickup as soon as possible. Watch the season premiere on Sunday Feb. 19 at 9/8C.

February 27, 2017 Jimmy Kimmel Deserves an Emmy For His Job Hosting the Oscars
Recent Comments
0 | Leave a Comment
"What was the name of the gentleman you were speaking to on CHristopher Closeup Sunday ..."
Katie Raggio Hossley Jimmy Kimmel Deserves an Emmy For ..."
"What a great article! Always loved the chracter and how it was developed from the ..."
Rick Malloy, S.J. The Catholic Church (and the Jesuits) ..."
"I loved the show and Father Francis John Patrick Mulcahy S.J played by the actor ..."
Fr.Ed Wade,CC The Catholic Church (and the Jesuits) ..."
"What a great tribute to a fine actor. As a Catholic I was never more ..."
RajunCajun The Catholic Church (and the Jesuits) ..."
Browse Our Archives
Related posts from Christopher Closeup