Behind All Joy Lies the Cross: A Review of the Film “The Innocents”

While the Soviets helped defeat the Nazis to secure a World War II victory for the Allies, they wound up bringing their own brand of vengeance and tyranny to the lands they took over in the ensuing years.

That is the starting point for a new inspired-by-a-true-story Polish/French film called “The Innocents,” which is set in motion by Soviet soldiers breaking into a convent and repeatedly raping the Sisters there over a period of three days, leaving several of them pregnant. (The sexual assaults take place before the movie begins and are only referred to in conversation, never depicted).

Here is the official synopsis:

Warsaw, December 1945: World War II is finally over, and Mathilde (Lou de Laâge), a young French Red Cross doctor, is treating the last of the French survivors of the German camps. When a panicked Benedictine nun appears at the clinic one night begging Mathilde to follow her back to the convent, what she finds there is shocking: a holy sister about to give birth and several more in advanced stages of pregnancy. A non-believer, Mathilde enters the sisters’ fiercely private world, dictated by the rituals of their order and the strict Rev. Mother (Agata Kulesza). Fearing the shame of exposure and the hostility of the new anti-Catholic Communist government, and facing an unprecedented crisis of faith, the nuns increasingly turn to Mathilde as their belief and traditions clash with harsh realities.

While the rape of the innocents is the story’s starting off point, the film isn’t about the soldiers but rather the after-effects on the victims, as well as the caring doctor who becomes their helper. 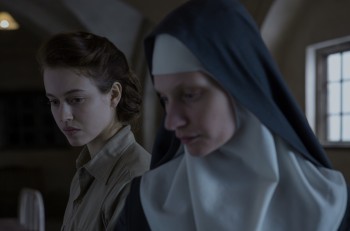 One of the film’s themes is that God can use anyone to bring His light into people’s lives. Though Mathilde is a nonbeliever, she serves as a role model of sorts to the Sisters that they don’t have to fear everyone and everything about the outside world. In addition to helping them deliver their babies, she provides them with understanding and compassion that offers them solace during the most trying time of their lives, after they’ve experienced the worst of humanity. And in one scene when Mathilde allows a pregnant Sister to listen to her baby’s heartbeat, joy intercedes in a situation in which there had only been darkness.

On the other hand, the Sisters reveal a spiritual side of life to Mathilde with which she may not have been familiar. In one scene, Mathilde listens to the Sisters singing their morning Lauds and she is obviously moved by the beauty of the harmony among them. She also senses a bond of community among the women that makes her long for something similar in her own life.

Through their interactions with each other, Mathilde and the Sisters become better human beings because they’ve been touched in their own unique way by beauty, truth, and goodness – all of which point to the divine.

Another noteworthy aspect of the film has to do with the culture’s attitude toward rape victims at that time – and within the religious community in particular. The Sisters feel like they have sinned by being raped and brought shame on themselves in the eyes of God and society.

While Mother Abbess says that God will help them through this ordeal, Mathilde insists, “God’s help won’t be enough. You need someone qualified. I can send a Polish Red Cross midwife.”

Mother Abbess responds, “If you do that, our convent will be shut down. If we’re evicted, our girls will be objects of shame. People will find out. Everyone will reject them. Many will die. My duty is to protect our secret.”

Mathilde agrees to secretly care for the pregnant Sisters herself, but the fact that she has to do it this way demonstrates how flawed everyone’s thinking is on this topic. These innocent women have enough pain to deal with in light of what happened. To be negatively judged by others is a grave injustice.

Along those same lines, the film also shows how a skewed adherence to rigid rules can lead down a hellish road. Without giving too much away, I’ll say that the story takes an unexpected turn in the final third of the movie. That turn is a result of the aforementioned shame and a total misunderstanding of what God wants from the lives of those devoted to serving Him. While some people believe that the modern Church indulges in an overabundance of mercy, “The Innocents” demonstrates the harm that a lack of mercy can do as well.

“The Innocents” also deserves credit for not whitewashing the effect this kind of crime can have on the faith of believers. Several of the Sisters struggle with doubt in the aftermath of the rapes, as revealed in this exchange:

Mathilde: Have none lost their faith?

Sister: You know, faith. At first you’re like a child, holding your father’s hand, feeling safe. Then a time comes – and I think it always comes – when your father lets go. You’re lost, alone in the dark. You cry out, but no one answers. Even if you prepare for it, you’re caught unawares. It hits you right in the heart. This is the cross we bear. Behind all joy lies the cross.

At the end of the film, the struggles with doubt aren’t resolved in some beatific vision from heaven, but rather in the choices the Sisters make regarding the best way to move forward with their lives – using love to navigate that fine line between faith and doubt.

Ultimately, “The Innocents” is a story of new life born out of horrific circumstances, a story of faith tested and distorted, and a story of the joy that can result when people choose love, service, and community. 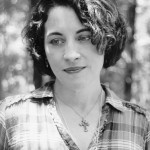 June 23, 2016
Doubting and Stumbling Are Part of the Road to Salvation: An Interview with Sarah Hart
Next Post 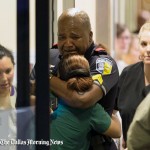 July 8, 2016 Live Together or Die Alone: Reflecting on an Angry America
Recent Comments
0 | Leave a Comment
Browse Our Archives
Follow Us!