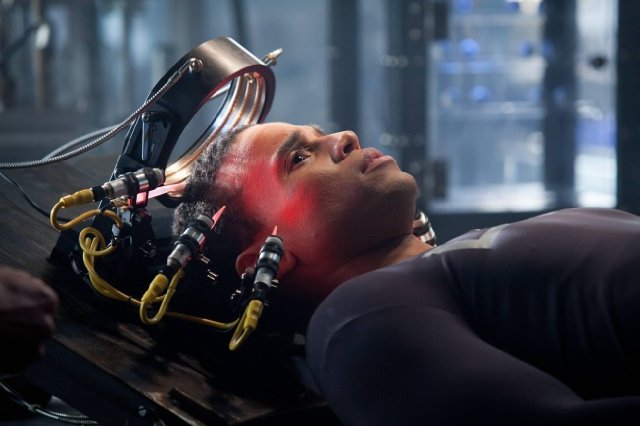 Sci-fi fans rejoice! Almost Human, the new hour-long weekly adventure from Fringe executive producer Joel Wyman, is finally here. The pilot aired last night as part of a two-night premiere event (the show will air regularly at 8 p.m. on Mondays), and you know what? There’s a lot to like.

Almost Human opens with police officer John Kennex (Star Trek’s Karl Urban) leading a squad in an urban assault on a mysterious gang known as The Syndicate. Things quickly go horribly wrong, however, and he wakes up 17 months later missing a leg and vague memories of what happened. When he returns to the force, he’s dismayed to discover it’s now mandatory for human officers to be paired with a synthetic android. After he casually disposes of his first partner—in one of the pilot’s most humorous scenes—he’s assigned to an older DRN model, a.k.a. Dorian (Michael Ealy). The DRNs were discontinued because they were emotionally unpredictable, much like humans, but Dorian’s laid-back and empathetic personality makes him an ideal match for Kennex’s gruff exterior.

There’s a lot of talent to work with here. Urban and Ealy achieve a smooth chemistry that makes the setup enjoyable, even though it’s familiar. Kennex’s boss, Captain Sandra Maldonado, was originally supposed to be played by a man, but I’m grateful the part went to Lili Taylor. It’s nice to see that in the future the glass ceiling has at least been cracked, and a woman is in charge of the LAPD. She comes across like a maternal figure for Kennex in the pilot, and I’m hopeful the show will add a few more layers to her as it progresses. Parenthood’s Minka Kelly plays a fellow officer but unfortunately doesn’t receive much screen time in the pilot, and Mackenzie Crook briefly shows up as the technician who introduces Kennex to Dorian.

Visually speaking, the show was clearly inspired by Blade Runner, which also followed a police officer and his interactions with androids. The cityscape is dominated by neon lights, dirty streets, and architecture that combines Eastern and Western influences. Wyman may be stealing, but at least he’s stealing from the best. The pilot (directed by Brad Anderson) reveals that street gangs are responsible for a lot of the crime, and there’s a seedy underbelly where all sorts of illicit activities take place. Kennex himself visits an underground medical center for dangerous treatments that could help him regain his memory, and one gets the impression there’s a lot to explore. The city feels grounded, like there could be a thousand intriguing things hiding behind every corner, and I’m looking forward to seeing more.

The pilot does a good job of introducing a lot of ideas that could be developed in future episodes. Kennex has a psychological aversion to synthetic technology—his robotic leg hasn’t fully integrated into his body and will occasionally freeze up. Dorian, meanwhile, wants to be accepted as an equal being, capable of emotional intimacy and friendship. It’s pretty much a given that they’ll be able to put aside their differences and work together, but the issues raised by their partnership could add a lot of complexity to their relationship. Do artificially intelligent beings deserve the same rights as humans? What makes something “human,” anyway? Are machines capable of genuine love? The central conceit of the show is interesting but familiar: we’ve all seen buddy cop programs, including a few where one of the partners was a little, shall we say, different. The success of Almost Human will depend entirely on how well the characters develop as they grapple with the world around them.

Executive producers Joel Wyman and J.J. Abrams recently spoke to Patheos and other outlets about their vision for the show, revealing that they see it, at least for now, as primarily a police procedural with a few subplots and themes that could be expanded on gradually. While the futuristic setting could allow for some interesting spins on traditional tropes, it’s certainly not uncommon for genre shows to embrace a “mission of the week”-style structure, especially early on. There’s a lot that Almost Human could explore, from our increasing reliance on technology to the issue of robot “rights,” and I personally hope that we’ll start to see more of a serialized structure soon. The time is ripe for another great science-fiction show in the vein of Battlestar Galactica, which used its premise as a launching point to build a grander mythology. Wyman’s previous show, Fringe, managed to function as a weekly procedural while also constructing larger story arcs, so hopefully Almost Human will manage to find the right balance between episodic adventures and serialized storytelling.

The pilot isn’t perfect. The primary case involving a potential gang attack on police headquarters is wrapped up a bit too neatly, and there’s no real antagonist except for a vague organization known only as The Syndicate. Overall, though, it’s a promising start to a series that could be perfect for sci-fi fans looking for a new hour-long adventure on Monday nights. I’ll have a review of the second episode after it airs tonight, and I’ve got my fingers crossed it stays this good…

November 19, 2013 "Almost Human" Review: Can The Show Go More Than "Skin" Deep?
Recent Comments
0 | Leave a Comment
Browse Our Archives
get the latest from
Cinemeditations
Sign up for our newsletter
POPULAR AT PATHEOS Entertainment
1