Courage In An Unusual Situation

About a few months ago, I was waiting in line at the confessional. A police officer walked into the basilica as though he were nonchalantly patrolling the area. He looked like he was in his early to mid-twenties and had his hand resting on his gun holster as though he was ready to draw fire, which caused onlooking parishoners including myself to nervously stir amongst ourselves. The young cop walked up to the front of the Eucharistic tabernacle and stared at it with a condescending smirk on his face. The once calm and reverent atmosphere had become uncomfortably tense.

After about a minute of standing in front of the tabernacle, the officer turned around and began to walk back down the aisle as though heading toward the exit. Several heads that were previously bowed in Eucharistic adoration turned and followed his path of travel. As he was just about to pass the lineup at the confessional, an older parishoner sitting next to me called out to him, breaking the deafening silence,

“Are you here to worship our Lord?!”

The officer stopped in his tracks, seemingly caught off guard.

“Excuse me?” he replied as he turned to approach the man beside me, hand still hovering over his holster.

“I said, are you here to worship our Lord?” the parishoner glared back.

“Then why are you causing fear? This is a place of worship!”

The young officer started to show his irritability as though he were thinking, how dare he question what I’m doing here?

“I’m on a patrol,” he replied defensively, “Why does that concern you?”

“Are we in an unsafe area?”

“Well……no,” the officer stumbled on his words, “but it’s for everyone’s safety.”

“Then take your patrol someplace else! You’re disturbing everyone here by the way you are walking around!”

Realizing the amount of heads that were turned towards him, the young cop began to melt in embarassment.

“Okay,” he replied as he eased himself away, “I’m sorry! I didn’t mean any harm.”

He made his way around the corner and the echo of his quickened steps gradually faded as he made his way out the basilica doors. The man sitting beside me seemed unshaken, returned to bowing his head in prayer shortly before the confessional opened for his turn to enter. I was probably as flabbergasted as everyone else who had witnessed this unusual confrontation.

To this day, I’m still confused about why this rookie of a cop did what he did. What kind of a situation called for him to place his hand on his holster while approaching the tabernacle? Why did he have such a weird smirk on his face? What was going through his mind at the time? Or was he just a young punk who was new in the uniform looking to flaunt his so-called authority in public? I have no idea, but all I know is it was probably the most bizarre situation I’ve ever seen within the sanctuary of a church.

What really impressed me was the man sitting beside me, possibly in his 50’s, had no qualms calling out the policeman in the moment. The officer could have easily manipulated the situation to make it seem like the man was verbally assaulting him, which could have resulted in an ugly physical scuffle leading to an arrest. The parishoner risked his own safety and reputation in the face of an armed cop – and for what? To preserve the solace for his fellow congregationalists in reverent worship? Because he felt as though God’s house of worship was violated from a hostile presence? I’m not sure what was going through his mind either, but I truly envy the unwavering courage that was displayed by this man because of what he believed in.

This was a highly unusual situation that could have ended a lot worse. At this point in my life, I don’t think I could have worked up the confidence to call someone out like that, especially an armed officer of the law.

But it made me consider, if I strongly believe in something, what am I willing to risk for it? My reputation? My dignity? My life?

What am I willing to lose to be in a relationship with God? 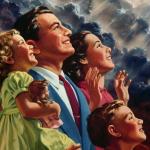 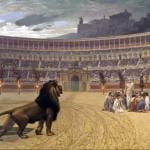 Catholic
The Idolatry of Freedom and the Inconvenience of...
Coffee & Crucifix 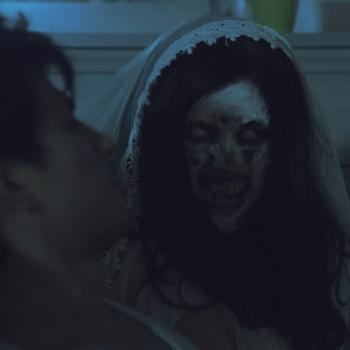