Are You Ready to Blow Your Mind? 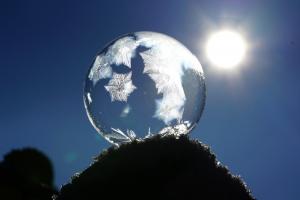 Act One – The Bubble

How the little air bubble found itself to be at 50 feet under the surface of the ocean is a story for another day.  But there it was, a tiny, fragile membrane tenaciously holding its interiority intact, like a pregnant woman protecting her unborn babe.  The pressure of the green-blue water threatened to snuff her out, but she held her breath and struggled towards the surface.  High above her she could see the sun, though she had no idea what it was.  As she made her determined way towards it, the water pressure seemed to diminish and she expanded into this ever-increasing freedom.  Finally, just when she felt she could no longer hold her breath, she breached the surface.  There was a deafening “POP!” and she was free; she was home; and she was gone.  She no longer existed.  For she was, essentially, air – and now she was united with air-Source.  The adventure and sometime-nightmare of being a discrete, separate, ontologically distinct entity was over.  And it had been her ability to rise and to expand that was the key to now being no-thing.

As waves go, it was a fairly lazy one.  It wasn’t one that the surfers at Maverick’s would have paid any attention to.  It practically meandered up the gently sloping beach, paused for a moment and then retraced its steps, backing into and under another wave.  The glistening beach made sucking sounds, like a baby eating jam off the back of his own hand.

A single water droplet remained on the beach.  She had managed to gather herself together in a tug of war with the thirsty sand.  She invoked the principle of surface tension and haughtily pulled herself into a perfect sphere.  She shimmered elegantly in the daylight, decorating her inner surface from the color palette of the sun.  Like a ballet dancer holding a gravity-defying pose, she stood on tippy-toe, a skin-encapsulated ego, a self-contented narcissist with eyes for nobody else.

She didn’t even hear the next furtive wave that slid fluently up the beach and gathered her in his embrace.  “Get your hands off me, you slimy creature,” she protested.  And then she remembered.  She dissolved in salty laughter, and her last fleeting thought was, “how could I have forgotten that I am water?”  The ocean listened and dispatched the next wave to recreate this drama, a drama that made its mighty soul smile.  For the ocean is a child who, on finding something that pleases it, says, “More, More!”

Scene One – The Introduction

Information cannot be lost.  It’s the law.  Science says so.  Oh yeah?  Well Sonoma County Planning Department lost my entire application in 2004 and never even informed me.  Months later when I asked them what was the delay in granting my building permit, they admitted to the loss.  I had to restart the process from scratch.

And what about Ollie North shredding vital evidence in the Iran-Contra scandal?  Doesn’t shredding destroy data?  When it comes to shredding, though, nobody does it better than a black-hole-in-space.  Stars, planets, even light itself, get chewed up without a trace.  Yet, science stubbornly refuses to agree. “No”, it says, “even then information is not lost.”  Since scientists are the high priests of our times, I will accept their word and then build upon their infallibility.

An artist, with a fascinated audience of hundreds, created a masterpiece on a borrowed beach.  The swim-suited spectators forgot to sunbathe and, instead, watched in admiration as he crafted the most elaborate sandcastle any one of them had ever seen.  It covered 600 square feet of beach, with turrets and garrets, drawbridges and courtyards and windows – and even a flagpole.  Cameras flashed and camcorders rolled.  Somebody phoned a local TV station and the big guns came out with boom mikes and serious-looking equipment.  It made the evening news.

The artist might well have been a Buddhist monk teaching the doctrine of Impermanence, for he had consulted the tides and he knew that the rising moon would soon release her bailiffs to reclaim the beach for the ocean.  The sun sank in the west, stretching the shadows of the turrets and painting the castle walls.  Moments later a huge, full, yellow moon lifted herself from her eastern bed and gave the silent command.  The first wave filled the moats; the second wave collapsed the drawbridges.  The artist bowed deeply to Luna, gathered his tools and departed.  A few little boys remained; one of the more rambunctious had to be restrained by his fellows from assisting in the demolition.  They stood in awed respect, wave water washing at their calves, as one by one the great walls fell.  Finally, the flag itself tilted and surrendered.  It floated out, still managing to retain its dignity.  One little boy said, “Maybe, it’ll float all the way to Africa!”

It didn’t.  The ocean had a plan for it.  As each section of the castle was demolished, the waves collected all of its information, memorizing the precise blueprint and relaying it to the great octopus who lived seven miles offshore and two leagues under the surface.  By midnight this mighty cephalopod had memorized each detail.  He didn’t need any of the physical materials from the original, for he had adequate supplies of his own.  He did, however, capture the flag.  He felt it would be a salute to terra firma.

Deep in the dark recesses, between rocky submarine ridges, he re-configured the castle.  It took him three days to finish the artwork.  It was a perfect, grain-for-grain replica of the Earthman’s effort.  Mermaids came and giggled together.  The old octopus looked sternly at them and they swished their graceful tails and swam away to tell their friends.

Cats can’t cough.  That’s why, occasionally, they have to heave up fur balls.  Black holes can cough.  In fact, they are famous for their coughing.  Perhaps the most famous cough of all is the one we call “the big bang.”  For that is what it was.  A big, black hole, that long predated our universe, had spent its life eating the contents of a previous universe.  Finally, it was sated.  It miniaturized all it had eaten, compressed it to a gazillionth of its original size and spat it out into the void.   And like a crumpled plastic bag, the digested, regurgitated universe began to reassemble itself; for, remember, information is never lost.  The Akashic records of our mother universe had gifted its baby with its entire DNA.  We have spent the last 13.7 billion years expanding and unpacking this gift.  And we’re not even halfway finished.  Some of the best parts are still to come.

We have merely reached the adolescence of this erstwhile baby universe of ours.  Nubile and alive, we have discovered a black hole at the center of our local galaxy.  It beckons us to the foreplay of lovemaking.  We are invited to conceive the next universe, to risk entering the no-thing-ness of the mystical void that we may birth the love-child of enlightenment. 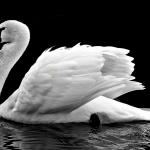 June 18, 2019 On the Way to Higher Consciousness - Part 1
Recent Comments
0 | Leave a Comment
Browse Our Archives
Follow Us!