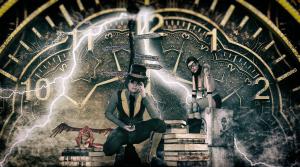 “The devil finds work for idle hands,” I was told as a child.  And, presumably, he also finds thoughts for idle minds.  Well, today, he took me off the dole by giving fodder to my idle hands and my idle mind!

I was walking near the solar shed, where 24 large batteries and two inverters, fed by 24 photovoltaic panels, turn sunlight into electricity for my house.  I spotted a snail crawling determinedly in a fairly straight line as judged by the silken, silver trail he left in his wake. I watched him for a few moments, which was when the devil struck.  I could see that his trajectory would take him to the door of my solar shed, and at his present rate of progress, I estimated it would take him 22 minutes.  I decided to intervene.  I grabbed a segment of blue tarp, about ten feet long, puckered it like a concertina so that by making hills and valleys of it, I reduced its horizontal length to about two feet, with a 12-inch straight flap at one end.   I placed this flap on the ground a few inches ahead of the snail.  When he reached it, he kept going full steam ahead.  Soon he arrived at the first hillock.  He deftly moved from hillock to hillock without ever having to visit the intervening slopes and valleys. In three minutes, he had reached the final hillock, so I smoothed out the tarp and, bingo!, he was now ten feet nearer his destination than before.  For him, space had shrunk and time had telescoped.

But the devil wasn’t finished with me yet – he had more ideas and work for my idle mind and hands.  The snail was now clambering over a small, flat stone, still making a beeline for the shed door.  Deftly I lifted the stone and carried it back 20 feet.  Now the snail was having a series of déjá vu moments: “I could have sworn I passed that thistle before!  Didn’t I crawl under that exact twig some time back?”

I decided he’d had enough frustration, so I picked up the next stone he clambered onto and moved it to within inches of the door. He climbed down off the stone and whistled, “Wow, I’ve made really good time!”

Then the devil got called away to a more pressing commitment and I fell to philosophizing.  I know that it takes humans one twenty-fourth of a second to process visual information.  So, if an image flashes on and off in less than that time, we can’t consciously process it, but the unconscious can and we call that, subliminal perception. Well, snails are about 72 times slower in their visual processing; it takes them about three seconds to do so.  Therefore, I was very careful in my interventions to act so quickly that he was never aware of my presence.

I had messed with his reality in several ways.  By folding the tarp, I was sending his future speeding back to his present, and increasing his ability to navigate space.   By playing with the stones he was crawling upon, I sent him back in time and then accelerated him forward in time. All of this involved an intimate connection between time, space and minds (his and mine.)

Thus, time, space and mind are all interwoven.  So, then, what if space could be puckered or folded, so that it is much more tightly packed in some “locations”?  It’s as if the destination is hurrying towards me, folding up the intervening distance, so that the travel-time shrinks. This would mean that, like the snail, I could travel greater distances faster, until I broke even the speed-of-light barrier.  It would also mean that I could travel backwards in time.  Imagine, for instance, your own birth.  As it was happening, the sights and sounds of it sent out electromagnetic signals (video and audio) into the universe, travelling at the speed of light.  But if time and space could be folded/shrunk, then you could travel much faster than light and overtake the audio-visual waves and then turn around and watch your own birth.

If you travelled far enough and fast enough, you could even buy a large coke and a bag of popcorn and view Jesus’ birth – or watch the Buddha under the bodhi tree, or listen to the deafening sound of the Big Bang.

And what if time could pucker up and be much more tightly packed in some “eras”?  Then, you could live constantly in a much-expanded present-moment that enfolds vast tracts of the “future” and the “past.”

Folded space and folded time collapse all experiences into the Here and Now.  And there are techniques for doing that, namely, learning to change your state of consciousness:  one state carries the stone forward, another carries it backwards, and a third state crimps the tarp.  Then all events become Now-experiences, and all destinations are Here-places.

Then the question becomes, “So if I can travel into the past, can I change the past and, therefore, the future of that past?  For instance, if I go back years before my own birth and meet a man in a bar and we get in a fight and I kill him – only to discover that he is my grandfather before he met my grandmother, does that mean that I will never be born, so I am actually living in an illusion of being alive?”  And the answer is, “No, it doesn’t mean that; it means that you will spin off parallel universes, in one of which (this one), you will be born of his lineage, and in another of which (not this one), your soul will find another grandfather to provide the incarnational lineage.”

Fear not, you are here now.

July 30, 2019 On the Way to Higher Consciousness – Part 3
Recent Comments
0 | Leave a Comment
"I enjoyed reading this article. Here are some of my thoughts about it: From the ..."
Morzen The Next Evolutionary Purpose for Humanity
"I came upon this article when googling the four stages of faith. What I found ..."
Cynthia Brown Christ The Religious Dilemma: Fundamentalism or Mysticism ..."
"Enjoyed reading this, along with reading the book. Looking forward to the next installments of ..."
Morzen Setting God Free: Moving Beyond the ..."
"Why are we here? Why are elephants, whales, hummingbirds and earthworms here? Why aren't dinosaurs, ..."
Robert Conner “Why Do We Exist?”
Browse Our Archives
Related posts from Companions on the Journey