Winterfell and Jerusalem, Game of Thrones and Palm Sunday 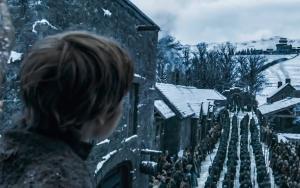 Warning! There are some spoilers for the season 8 premiere of Game of Thrones. Nothing major but, you’ve been warned.

It is so extremely fitting that the premiere of the final season of Game of Thrones debuted on Palm Sunday.

The opening scene is much like we experienced in liturgy over the weekend: a throng of people gathered to greet and even worship Christ the King as He triumphantly rides into Jerusalem is seen in the people of the North gathered to see what the big parade is all about and see their hero, Jon Snow, riding home triumphantly with the help he promised to find in the form of Daenerys Targaryen.

The joy doesn’t last, though, as the people of the North gather in the great hall of Winterfell and express their disappointment that Jon has bent the knee and renounced his title as King in the North. Further north, the Night King moves smugly south, ready to take over the world of Westeros, just as Satan lies around the corner of this Holy Week, ready for the demise of the One he would not serve.

A triumphant return we know has a bleak ending.

We know that Jesus riding into Jerusalem was the beginning of the end. It was the first in a series of actions that would ultimately lead to His death on the cross. Because of this, we often overlook the fact that Palm Sunday is a day of rejoicing. We see the fickleness of people, their lukewarm hearts ready to turn as soon as a better-looking offer comes along. We fail to see the true joy of the people as they welcomed Christ into Jerusalem. We fail to see the joy of Christ in doing this for His people, though we do tend to see His acceptance.

In this first episode of season 8 of Game of Thrones, Jon Snow said on several occasions that he promised to bring back help, that he cares for the wellbeing of the people of the North and would do whatever it took to keep them safe. So far, it has cost him his crown as King in the North, but more may be asked of him soon. Everyone knows the Night King is on his way but everyone seems to have different ideas on how to handle that situation. Only Jon and Dany (and Tyrion) understand the true threat and so they are the ones to put their lives on the line.

There is a plot afoot.

Down in King’s Landing, Cersei currently sits on the Iron Throne and plots her own revenge against her brothers Jaime and Tyrion, whom she sees as traitors, and plots how to wait out the Night King and remain alive and victorious. She is cunning and vile and not afraid to use any means necessary to take down her foes. Her fate still alludes us at this point.

In Jerusalem, we know that the chief priests and elders and pharisees and sadducees and Roman authorities are already conniving about how to best take down Jesus. They’ve already begun plotting with Judas Iscariot, whom they’ve identified as the weak link in Jesus’s inner circle, to betray Jesus. Unlike Cersei, we do know that fate of Judas and we do know that it is an unhappy one.

So why all this comparison?

Since the beginning, we’ve known that Game of Thrones is a story about the end of the world. We know that it will end in destruction and annihilation and a compete reset of life as these characters know it. But we don’t know how this will be accomplished or how it will all turn out. It is a great bit of apocalyptic storytelling.

Since the fall of man, we have known that God would have to save us. The Old Testament is rife with the story of salvation and the prophecies of how God would fulfill His promise to His people. As soon as the angel Gabriel appeared to the Blessed Virgin Mary, she knew how it would end. Simeon simply affirmed this in his prophecy that a sword would pierce her heart. This is the story of the salvation of the world, the complete destruction of the old way and the beginning of the new way. Holy Week is the story of the apocalypse of a sinful world, Satan destroyed in a way unforeseen and unimaginable.

Palm Sunday tells us of the relationship between Christ and His people. That Christ comes to us and embraces us and allows us to come to Him or to turn away. With all the reunions in GoT season 8 episode 1, it is easy to see that this story also hinges on the relationships between its people and how these relationships will make and break the fate of Westeros. We do not know how Game of Thrones will end, yet; perhaps it will be very bleak with not an ounce of hope. But we do know how Holy Week ends– the gates of heaven will be swung open for all the faithful to enter through, but not before Christ undergoes the most wretched war for us and offers Himself in our place. Would that we should follow His (and, so far, Jon Snow’s) example. 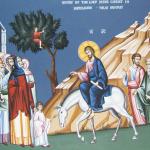 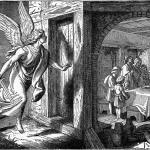 April 18, 2019 Lord, Don't Pass Me Over
Recent Comments
0 | Leave a Comment
Browse Our Archives
get the latest from
Catholic
Sign up for our newsletter
POPULAR AT PATHEOS Catholic
1