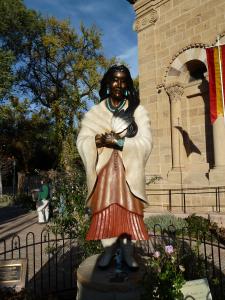 Kateri Tekakwitha is the first Native American to be recognized as a saint. This is a huge travesty but a good start. (Learn how to pronounce her name here.) She was called the “Lily of the Mohawks” and lived a life full of suffering. Kateri was an Algonquin-Mohawk laywoman from upstate New York.

Kateri was named Tekakwitha at birth, which means “She who bumps into things”. Apparently she was clumsy. Her mother was an Algonquin assimilated into the Mohawk tribe and married the Mohawk chief. Her mother was baptized Catholic but her father did not convert.

Kateri contracted smallpox as a child, which marred her face horribly and impaired her vision. Her family died in the epidemic. Kateri was then adopted by her paternal aunt, whose husband was a chief of another tribe. Her relatives cared well for her, though they were largely uninterested in her future.

She became skilled at making clothing and belts from animal skins, weaving mats, baskets and boxes from reeds and grasses, and preparing food from game, crops, and gathered produce. Kateri was largely unsocial but took part in the women’s seasonal planting and intermittent weeding. She was also pressured to consider marriage around age thirteen, but refused.

After some upheaval, the Mohawks were forced to sign a peace treaty that included allowing Jesuit missionaries into their villages. The Jesuits were good to the Mohawk people, though, and learned their language and some of their imagery to draw parallels between their beliefs and Christianity.

Kateri was baptized on Easter in 1676 taking the name Kateri for St. Catherine of Siena. Kateri is the Mohawk form of Catherine, which is super cool. There goes Catholicism reaching into every aspect of our lives an every culture ever. She then moved to the Jesuit mission nearby and spent her last two years there.

With her friend Marie-Thérèse, Tekakwitha readily took up penances. She put thorns on her sleeping mat and prayed for the conversion and forgiveness of her kinsmen. Piercing the body to draw blood was a traditional practice of the Mohawk and other Iroquois nations that dovetailed with the Catholic practice of mortification.