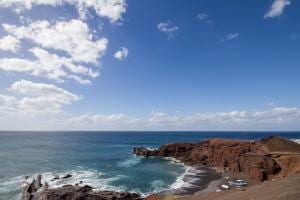 James Andrade was a native of Coimbra, Portugal. He entered the Jesuits as a young man and, in 1570, set sail for the West Indies with a band of Jesuit priests led by Blessed Ignatius de Azevedo. The captain of the ship was a Huguenot Protestant who wasn’t fond of Catholics. While on board, the captain put all of the men to death by throwing them off the boat in the middle of the sea near the Canary Islands.

Not much is known about Blessed James Andrade other than this but he’s worthy of knowing. James followed his call even unto death and that’s an admirable thing. Isn’t that what we must all do? Follow our call unto death? Our call may change throughout the course of our lives, and that, too, is good. As we are varied, God is even more varied, and calls us according to our variety.

Since not much else is known about him and his companions, I’ve tried imagining what James Andrade’s final moments were like (since I’ve deigned to write about him for you). To be tossed into the sea– I wonder if he knew how to swim. I wonder if they tried to swim to shore. I’ve been present at the final moments of people before, so I imagine what James’s were like.

I don’t know if any death can really be peaceful, per se; it is a violent ripping away of one part of yourself from the other. But of all the ways to be violently torn apart, I imagine drowning to be as peaceful as it can get. Maybe only second to dying in your sleep. So often, death is portrayed as a dark agent but I think he looks more like an old friend taking our hands and comforting us, giving us safe passage. I suppose in this way, all death is peaceful.

I wonder what James Andrade’s life was like. He must have been a good and faithful person or else he wouldn’t have been beatified! But I wonder about the small and unknown parts of his life that weren’t worth recording at all. Only God knows. Most of us live these small, hidden lives that aren’t worthy of recording. But God knows.

July 16, 2020 Mary Magdalen Postel- July 16 (Everyday Saints Series)
Recent Comments
0 | Leave a Comment
Browse Our Archives
get the latest from
Catholic
Sign up for our newsletter
POPULAR AT PATHEOS Catholic
1