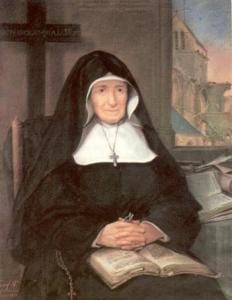 Mary Magdalen Postel was born on November 28, 1756, in France and baptized as Julia Frances Catherine. As a child, she was educated by Benedictine nuns and, during this time, she took a private vow of chastity as the first step on the road of her dream to enter religious life. When she was eighteen, she opened a school for girls in her hometown. However, revolutionaries closed the school when the French Revolution broke out. Mary Magdalen Postel then sheltered fugitive priests in her home and they celebrated mass secretly there.

After the concordat of 1801 between Napoleon and the Holy See, she again worked in the field of religious education. She initially entered the Third Order of St. Francis in 1798, then taking the name Mary Magdalen. In 1807, she and three other teacher took religious vows, and this was the beginning of the Sisters of the Christian Schools of Mercy. At this time, she was named superior of the order.

The community got off to a rough start and were forced to move several times before finding a more permanent place in 1815. When Mary Magdalen Postel obtained the abbey of St. Sauveur le Vicomte, the congregation finally began to flourish. Her order received diocesan approval and then the papal decree of praise in 1857. Many years later, in 1901, the order received full papal approval. She died in 1846 at the age of 89.

Mary Magdalen Postel was known for her holiness and miracles. She was canonized in 1925, just twenty-four years after the order she founded finally received full papal approval. 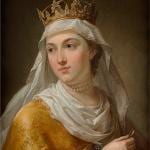 July 17, 2020 Hedwig of Poland- July 17 (Everyday Saints Series)
Recent Comments
0 | Leave a Comment
Browse Our Archives
get the latest from
Catholic
Sign up for our newsletter
POPULAR AT PATHEOS Catholic
1