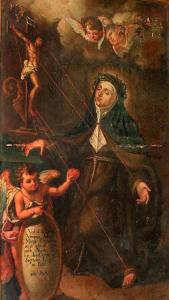 Veronica (her birth name was Ursula) was a Capuchin Poor Clares nun known for her spiritual and mystical gifts. She was born near Milan, Italy and entered the convent when she was just 17 years old. It was then that she took the name Veronica in remembrance of Christ’s Passion, a name that would end up having particular significance in her life.

Veronica was a very practical woman and led her sisters with common sense. As novice mistress, a position she served in for thirty-four years, she wouldn’t allow them to read mystical books but made them start with Christian basics. This ensured that all of the sisters received good catechesis and remained grounded. As abbess, she enlarged the convent rooms and had indoor plumbing installed.

This grounded, common sense was precisely that which allowed her to enter deeply into the mystical life of Christ. Veronica received the marks of the Crown of Thorns on her forehead in 1694 and then the five wounds of the Crucifixion (commonly known as the stigmata) three years later. Because of these, the bishop and her sisters subjected her to great scrutiny. For a while, Veronica was removed from ordinary community life and observed constantly. She returned to normal convent life after her stigmata were determined to be authentic.

What Veronica wanted most in life was to become a true image of Christ. She did this through her reception of the stigmata, for sure. But she also did this in her private life of prayer, penance, and obedience. Veronica wrote of receiving the stigmata: “I felt great pain but in this same pain I saw myself, I felt myself totally transformed into God.” Like her name declares, she indeed became a “true image” of Christ in all ways.

Today she lies incorrupt in the Capuchin Poor Clare Monastery of Città di Castello, Italy. I also wrote about her in my chapter “Punk Rock Catholicism (aka Tattoos)” for Catholic Hipster: The Next Level.

July 9, 2020 A Great Pretender
Recent Comments
0 | Leave a Comment
Browse Our Archives
get the latest from
Catholic
Sign up for our newsletter
POPULAR AT PATHEOS Catholic
1