I only got about a thousand words written on Watchman for Daybreak this week, but I feel like I’m making great progress.

First, it’s interesting to work in such a different way than usual. Usually I start at the beginning and writing the story to find out what happens; this time, I know pretty much what’s going to happen from one end of the story to the other, at least in its broad outlines. Consequently, I’m writing not to find out what happens, but to find out how and why it happens. In addition, this means that I’m not writing the scenes in the order they will appear, but in the order I figure things out. Certain things need to happen, but the order they appear on the book will not be strictly chronological. There will be at least one main thread, and flashbacks, all to the end of revealing the story to the reader in an interesting way; and I’m not even sure quite yet how it will all fit together.

But the big breakthrough this week is in my understanding of the protagonist. I’ve got this problem: I tend to want to make my heroes too perfect. I don’t think I’ve ever written a classic “Mary Sue” character, but my heroes tend to have amusing quirks rather than out-and-out flaws. That can sometimes work all right in a tale of derring do, where the hero is supposed to be mighty and heroic and possessed of all outstanding qualities and the conflicts are all external; but it’s hard to write a genuine novel, one with serious internal conflicts and (one hopes) growth, if the protagonist is already perfect on the first page.

Now, John St. Cloude, captain of the Loreto, is supposed to be a serious Catholic. In the first major scenes I wrote, consequently, I was trying to establish his piety and his virtue, and it wasn’t quite working for me. It tended to kill the drama. And it wasn’t working because at that point in the tale he’s still a fairly young man, and the serious incidents of the tale haven’t yet occurred. I need room for self-discovery and growth, and if, as I say, he’s already perfect, there’s no where to go.

And then as I wrote last Sunday’s blog post, I realized what the solution was: he’ll be a serious Catholic, all right. Dreadfully, painfully serious. This will mean rewriting a lot of what I’ve got, but you know, I’m okay with that.

Flounders and Schnauzers and Spies, Oh My! 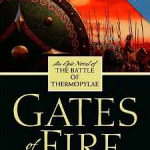 April 8, 2014
Review: Gates of Fire, by Steven Pressfield
Next Post

April 10, 2014 Archie Says: On Locks and Listening
Recent Comments
0 | Leave a Comment
"You should update your bookshelf page accordingly."
3vil5triker . In which the Blogger is Very ..."
"You need to change the "KS" photo. It's of KANSAS CITY, MISSOURI. It is not ..."
Nessy Meme Watch: Economic Bullsh*t
"This has been on my wish list for a while. Sounds like I need to ..."
Rebecca Fuentes The Apostasy That Wasn’t
"Is not the “splendor of heaven” the presence of God in all His glory, of ..."
jayne_wayne Splendor Fatigue
Browse Our Archives
Related posts from Cry 'Woof'