Why Not Worship Zeus?

Several commenters on my post “Proving God Experimentally” asked why my experiment would lead to belief in the specifically Christian God?  Why not to some other religion?  Similarly, my atheist interlocutor Korou said,

To be fair, I’ve never asked Allah or the Hindu gods, or Zeus to do the same.  From my point of view, any of them are as likely to exist as the other.

As I’ve noted elsewhere, I didn’t come to the Catholic faith as a result of an exhaustive search of the possibilities; I came to it because I was already a Christian, and among Christian denominations the Catholic faith makes most sense to me.  I was already a Christian in part because of my upbringing and in part because of particular experiences I had of God’s presence.  I have no purely logical argument to make to bring an atheist to belief in Christ; but I can say that I follow Christ with my intellect and my will.  If my faith were a shoe, I can honestly say that it doesn’t pinch at me intellectually.

However, it’s a fair question.  As one who doesn’t believe in any god, why believe in this one? Or, more bluntly why worship any God?  Worship is much more than belief: it is giving the deity in question respect, honor, sacrifice.  It is clearly nonsensical to worship a deity that doesn’t exist; but even if the deity exists, why worship it?

The Christian answer is because worship is justly owed.  Justice is the virtue of giving to each what he or she is due; and worship is what is due to God.

Well, but why is worship justly owed to God?  The Christian answer is that God is the creator and sustainer of all that is: because we owe Him not merely our lives but our very being, and the being of all that is around us: the air we breathe, the water we drink, the food we eat, the beauty we see, the universe we strive to understand.  As we have a filial duty to our parents for bringing us into the world and raising us, so we have a religious duty to our God.

I don’t ask my atheist readers to accept that God exists on my say-so; but if the God described by Catholic theology does exist, then worship is the reasonable response.  The only real rejoinder is that this God is not a good God but an evil God; that the pain and suffering around us put paid to any notion that God is good and therefore worthy of worship.  That’s a separate discussion; for the purposes of this discussion, let’s take it as read that the universe is a good thing, that life is a good thing, and that existence is better than non-existence, ‘mkay?  We can maybe get into theodicy some other time.

Thus far I’ve argued that worship is what God is justly owed, and that the Christian God, if He exists, is worthy of this worship.  Now let’s take a look at the different concepts of God that Korou referred to.  We’ll start with Zeus.

The Greek Gods, Zeus among them, aren’t the creators of the world.  They came to be in time, and postdate the beginning of all things.  As described in the Greek myths, they are a dysfunctional family of immortal beings with superhuman powers who like to meddle with humanity.  At its worst the sacrifice due them is more like protection money than a just due.

In St. Augustine’s day, the eternal city of Rome was sacked by the barbarians.  There were pagans still living in Rome then, and many of them claimed that the sacking was the gods’ punishment on Rome for harboring Christians who neglected the proper sacrifices due to the Roman pantheon.  I’ll note that the sacrifices were seen to be owed to the gods; their anger was seen as a just response.  Worship is what is owed in justice.

Now, it’s possible that the Romans might owe something to Jove (if Jove actually existed) purely out of a kind of filial piety.  But even if so, that’s no reason why I should honor Jove; he wouldn’t be the god of my people.

Augustine’s response to these charges was his immense work, The City of God.  He spends the first ten books pointing out that the Roman gods, if they existed, would have no just claim on the worship of men: not only do they do little to benefit their worshippers, they don’t even provide a good moral example.  And long before his day the best Greek thinkers had recognized that the gods couldn’t be the last word in divinity: ultimate reality had to depend on something deeper that was truly worthy of worship.

Another ancient religion is Zoroastrianism.  In this religion we have two principles rather than one: the good god Ahura-Mazda and the evil god Ahriman.  But two distinct gods can no more be the ultimate cause of reality than many smaller gods; there still needs to be something deeper.

Therefore, adieu to Zeus, Hera, Mars, Athena, Aphrodite, Woden, Thor, Baldur, Isis, Thoth, Ishtar, and all of the rest, at least in any naive conception.  To be fair to modern neopagans, insofar as I understand their beliefs, they generally do not believe in Woden or whoever in any such naive way.  The gods are seen as embodiments of deeper principles of some kind.  How much deeper can we go?

The most prominent polytheistic religion in the modern world is Hinduism, so let’s take a look at that.  No doubt there have always been those worshippers who take it as face value; but it is often understood that there is a deeper level, and I have usually seen that deeper level described as pantheistic: the divine is immanent in reality.  The physical world is an illusion; in truth, all is God.  I am God, you are God, the chair I’m sitting in is God.  Pantheism aims to be an explanation of ultimate reality. Presumably other polytheisms can be understood in the same way.

The point here is that any deity that isn’t in some way the ultimate cause of the reality around us is less worthy of the name, and of worship, than the underlying reality that is that ultimate cause.  That still leaves a wide field to investigate: pantheism, deism, and monotheism, in their various flavors.  But it rules out naive polytheism along with Mormonism and pseudo-religions like Scientology.  (The God of Mormonism is seen as a being among many who rose to Godhood.  A similar existence is promised to the faithful; as God is now, so shall they be.  The question of ultimate reality isn’t addressed; or if addressed, is dismissed.) 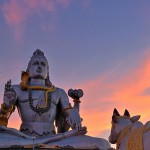 July 1, 2015 In Search of Ultimate Reality
Recent Comments
0 | Leave a Comment
"You should update your bookshelf page accordingly."
3vil5triker . In which the Blogger is Very ..."
"You need to change the "KS" photo. It's of KANSAS CITY, MISSOURI. It is not ..."
Nessy Meme Watch: Economic Bullsh*t
"This has been on my wish list for a while. Sounds like I need to ..."
Rebecca Fuentes The Apostasy That Wasn’t
"Is not the “splendor of heaven” the presence of God in all His glory, of ..."
jayne_wayne Splendor Fatigue
Browse Our Archives
get the latest from
Catholic
Sign up for our newsletter
POPULAR AT PATHEOS Catholic
1