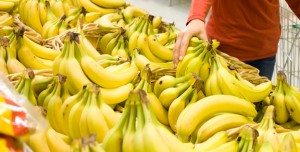 As I sliced up a banana for my morning corn flakes while waiting for the transit of Venus, my public radio coincidentally broadcast a piece about my fragile yellow crescent of potassium. I already knew my banana to be the most popular fruit in the country, despite its severely short shelf life. What I didn’t know was the ruthless journey by which the banana gained its popularity. The story is told in Rich Cohen’s book, The Fish That Ate The Whale: The Life and Times of America’s Banana King. It’s about how a determined immigrant named Samuel Zemurray “came to America as a teenager, amassed a fortune to rival the Rockefellers and built great cultural institutions. But Zemurray also helped foment coups, rip up countrysides and impose his will, wiles and schemes all over Central America.” You might say he was responsible for the creation of banana republics (the corrupt governments, not the clothing line). This was all for the sake of making bananas America’s Numero Uno.

What struck me about the NPR broadcast (you can hear it here), were Cohen’s comments about how the Banana King’s shady exploits typified American ideals. He said that Americans like to think that power and innocence can go hand in hand, but the truth is that they can’t. Europeans know this, perhaps as result of their own history. They understand that power can never be pure, that where you have power, you will always have sin (Cohen actually used the word “sin”.) As a Russian Jew (shaped both by his proximity to the European experience and his religion), Samuel Zemurray eventually recognized the havoc he’d wrought in his quest for fruit hegemony. In an effort at atonement for his sins, Zemurray devoted much of his fortune to philanthropic efforts in Central America later in life.

Thinking about the mutual exclusivity of power and purity among humans (“absolute power corrupts absolutely” for instance), I understand why most people hold that the purview of innocent power belongs only to God. The Lord alone is almighty and all-good. While this affirmation continually exacerbates the theodicy riddle (“If God is all-powerful and all-good, why is there evil?”), nobody disputes the initial premise. Take away either power or goodness and God is not God. That God alone can pull both off together is what sets him apart from his creatures. Consequently, human exertions of extreme power under the guise of pure motive inevitably leaves a swath of road kill in its path. We’ve seen this over and over in American history. It’s happened whenever humans have assumed divine prerogative for themselves.

June 7, 2012 Calling All 'Reflective Exiles'
Recent Comments
0 | Leave a Comment
Browse Our Archives
get the latest from
Evangelical
Sign up for our newsletter
POPULAR AT PATHEOS Evangelical
1