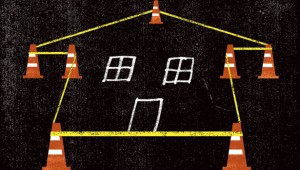 As the economy continues its gyrations on the backside of the housing bust, a company called Digital Risk works to prevent another toxic mortgage collapse. As The Atlantic magazine reports this month, Digital Risk does its preventative work by treating the mortgage collapse like a crime scene, “reconstructing circumstances that led to so many Americans to buy houses they couldn’t afford,” and then making sure such scenarios aren’t repeated.

Digital Risk’s objective is to give lenders “actionable intelligence” to help ascertain quality, identify risk, ensure compliance and mitigate fraud. Among the riskiest and most fraudulent borrowers that financial institutions should avoid? Pastors. According to the evidence, shepherds of flocks onto the paths of truth have no scruples when it comes to fleecing mortgage lenders, doctoring bank statements, buying houses they couldn’t pay for, and then filing for bankruptcy. The good news is that while ministers may fail to practice what they (hopefully) preach, their congregations don’t suffer the same hypocrisy. As one Digital Risk investigator put it,  “The nice thing about pastors is that their church shares information when asked. Pastors are always an easy [fraud] claim.”

If I was to venture a reason why ministers cheat like this, I would guess it has something to do with that sinister sense of entitlement that can seep into a pastor’s soul once you’ve been pastoring for a while. You get into the church business having felt called to it, desiring to serve the Lord rather than make a lot of money since you can’t serve God and mammon together (so said Jesus). But because serving the Lord can be too heavy a cross to bear–what with cantankerous church meetings, ungrateful parishioners, a sermon a week, high expectations and low budgets–it doesn’t take much for a high calling to sour into a bitter feeling of injustice. You convince yourself that somebody owes you for your having been such a good Christian. Cheating is just a way of getting what’s rightfully yours. After all, Jesus also said that the last should go first.

Then again, according to Stanford University neuroscientist Robert Saplosky, cheating may reflect a neurological shortage of grace. A recent study sought to measure cheating and lying using MRIs on subjects given the chance to cheat on a simple coin toss report. Researchers found that when the opportunity to cheat arose, activity in the part of the brain responsible for moral control lit up like a battlefield for the cheaters. It was evidence of epic spiritual warfare–do it/don’t/yes/no–that the liars inevitably lost. Truth-tellers, on the other hand, experienced no conflict. They calmly did the right thing even when no one was watching. Saplosky asks: “Does this require a person working hard to refrain from doing the wrong thing? Or is it an act of grace, effortless because temptation isn’t tempting? In the study’s paradigm, it was grace all the way–among the unequivocally honest, there was no increase in [brain] activity when the chance to cheat arose… There are those who glide through minefields of enticement, doing the difficult, rare, brave, correct thing as naturally as breathing.”

Clearly, we ministers need grace as much as anybody. If not more.

June 12, 2012 Art and Grace
Recent Comments
0 | Leave a Comment
"What do you folks think of this one?-- Quoted from News4JAX -- 11/25/16 --"JACKSONVILLE, Fla. ..."
y3shuA imMANu3l Divine Intervention vs Divine Involvement
"So Melville traveled to Jerusalem in an effort to recover his Christian faith...hmmm, interesting, but ..."
Gregg Thomas Melville’s Epilogue
"I fail to see how Holbein's work 'deprives the Christian of hope' any more than ..."
Joseph The Dark Light of Thomas Kinkade
"You’ve written nice post, I am gonna bookmark this page, thanks for info. I actually ..."
Marc Barber The Dark Light of Thomas Kinkade
Browse Our Archives
Related posts from Cultivare