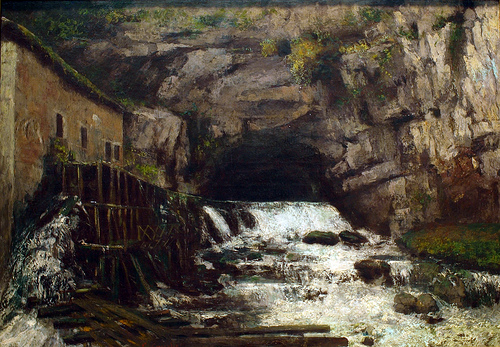 Gustave Courbet, The Source of the Loue, 1864. Metropolitan Museum of Art, New York

The over-heated art market, driven by insecure and short-sighted collectors, who, churning through the season’s aesthetic fashions to use art to leverage their cultural power, have produced an impatient and distracted art world incapable of separating artistic quality from auction house results and dealer price-points. (For more detailed information about this anxiety-ridden world, see my posts, “Damien Hirst is Free” and “The Scream, A Stuffed Shark and the Insecurity of Culture.”) Art museums, once citadels against this pressure, are now one of its most important instruments, as curators appear more interested in curating collectors than artists, acquiring access to power rather than cultivating artistic practice.

The contemporary art world seems less and less capable of remembering that history shows that the career of the artist is measured not by the May and November auction results but in decades. The development of an artistic vision is achieved over a long arc. The Abstract Expressionist master Willem de Kooning painted for twenty years in New York before he had his first exhibition at the Charles Egan gallery in 1948. The obsession with the new, with the young and fresh, has produced an environment in which an artist in her mid-forties, having worked in the art world for over twenty years, is too old to attract the attention of these taste-making collectors and their train of curators. This poses significant obstacles to her artistic development.

What can contradict the impatience and insecurity of the art world in which artists function as chips in a high-stakes cultural card game? Some artists, like Damien Hirst and Jeff Koons, have tried to join the game, becoming one of the players. Yet this strategy, as successful as I think it is in some respects, also works against their long-term development as artists, since they are forced to treat their own work as chips, thereby granting the common assumption that their work is merely instrumental, the means by which they get to play with culture.

Patronage is another strategy. A patron offers regular financial support for an artist that is based on the patron’s belief that the artist is worth support whether or not her work is in fashion. Patronage is a long-term strategy for artistic development. It forges the creative space that enables an artist to develop artistically without the fear that such development will destroy her career by scaring off collectors. It provides the financial stability to enable her to make work for an audience that is not limited to speculators. Patronage can thus provide the freedom that allows an artist not to have to make work for an exhibition at her gallery for the sole purpose of generating sales. Patronage allows her the freedom to say, no. It allows her to produce a writing project, do research, or read poetry. In short, it enables the artist not to have to sell work to collectors to pay the bills or justify herself as an artist. Patronage allows the artist to grow and develop in ways that the market and the gallery structure cannot measure.

Patronage is a form of grace. The patron offers resources to an artist whose work may not, according to the gallery-auction house network, merit it. By providing resources that open up creative space, the patron believes that the artist’s work will, over time, attract the attention it deserves. In this way, patronage is an act of belief. The patron believes that the artist’s true audience for her work remains in the future.

The need for patronage in the art world is not a new idea. Frustrated by the art world, many cultural commentators—including many who hold Christian convictions—point to the role of the Renaissance and Counter-Reformation Church as the model for a kind of artistic support that circumvents the precarious nature of the gallery-auction house network.

As instructive as those moments are, I would like to suggest that nineteenth and twentieth century modernism offers a more robust model for contemporary patronage, one that works with and against markets of taste that are broader and more complicated than in fifteenth-century Florence or sixteenth-and seventeenth-century Rome. Consequently, the relationship between patron and artist is less fraught with master-servant complexities, thus operating as a collaboration or partnership in the pursuit of shared goals. And these shared goals often consisted of undermining or circumventing existing social, cultural, and political structures. In the history of modernism, patronage is a form of cultural criticism, of pushing against dominant systems of value and distribution. We need to revive this idea of patronage as cultural criticism, as an embodiment of discontent with artistic business as usual, and a renewed faith in the power of art.

And finally, patronage in the history of modernism ultimately consisted of helping to create that audience that artist deserved, generating reception for an artist’s work that embodied a new social vision. Patronage works to achieve an audience over time. This way of thinking about patronage is helpful in two ways.

First, it does not limit the role of the patron to a check-writer, one who simply offers financial means for this or that artist to pay for this or that project (flipping the Renaissance/Baroque master-slave roles). Too much discussion about patronage centers exclusively on finding the money to pay for our little projects. The patron provides creative space for the artist to work without some of the financial pressures that are the fuel that runs the art world engine, but this space also allows for honest conversations between patron and artist and the development of a community of honest feedback and mutual conversation, liberated from the restrictions and anxieties of the gallery-auction house network, which artists rarely receive.

Second, it reveals that patronage, if it is primarily concerned to create an audience for an artist’s work, also must include the curator, who stages exhibitions, and the critic who, through her words, contextualizes them.  Often, in the history of modern art the patron played the role of curator and critic as well. The audience who receives the artist’s work, must be achieved—created—through the efforts of patrons who believe deeply in the artist’s vision, who are committed to marshaling all the resources necessary in order to put the work of that artist in front of that audience, an audience only to be realized fully in the future. And that requires curators, critics, and even gallery owners to serve as patrons, sacrificing short-term gain for long-term vision and commitment. The patronage model offers an eschatological vision.

When I see Gustave Courbet’s painting, The Source of the Loue (1864) at the Metropolitan Museum of Art in New York, it exists for me at that moment because of the efforts of Courbet’s collaborator and patron, Alfred Bruyas, whose significant financial, ideological, and creative support provided the space necessary for Courbet to paint against the Academy. However, it is also there before me because of the tireless efforts of other patrons, such as Proudhon and Jules Castagnary, Jules Champfleury, Charles Baudelaire, and other writers and thinkers who offered their talents for a time in order to create the Courbet whose painting confronts me.

Perhaps the time is right to re-imagine patronage by rediscovering its important role in the history of modern art.

December 19, 2012 300 Million Guns and Counting
Recent Comments
0 | Leave a Comment
Browse Our Archives
get the latest from
Evangelical
Sign up for our newsletter
POPULAR AT PATHEOS Evangelical
1