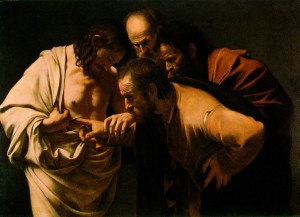 Jesus deliberately stays silent before Pilate and brings Isaiah to fulfillment. When he finally speaks from the cross he speaks from the Psalms of lament. God stays silent and allows the evil, further prodding skeptics to malign a heavenly Father who would commit what looks like savage child abandonment and abuse. However, in the mystery of trinity, the Jesus who silently suffered and died was God the Father himself, crucified for sin and suffering with those whose voices never get heard. Moreover, in the mystery of incarnation, the Son of God who suffered and died did so as a human being. Jesus who is one with God is also one with us. What happened to Him happened to us. Jesus died and took our sin and sorrow down with him. And then on Easter he rose to bring us back up. The apostle Paul realized this first hand: “I have been crucified with Christ, it is no longer I who live, but Christ who lives in me. The new life I live in the flesh I live by faith in the Son of God, who loved me.” And yet even in resurrection victory, Jesus still wears the telltale scars of his slaughter. He refuses to hide the evidence of his hurt. The Christ who lives in us is the crucified God.

Christ’s death and resurrection is not simply about turning a sad thing into a happy thing. Such a view of crucifixion is trivial and patronizing. Jesus’ crucifixion was a horrible and appalling injustice. And it’s never saved anybody from suffering and dying. Instead, Jesus deliberately and willfully saves through suffering, through death, turning a horrible thing somehow into a holy thing—holy in that terrible, awesome way God’s grace both overwhelms and silences us. Unjust suffering somehow is redeemed as sacred, a scandalous idea to so many, as offensive as the cross itself.

This is a very difficult teaching.

April 17, 2014 Kierkegaard on the Atonement: A Reflection for Maundy Thursday
Recent Comments
0 | Leave a Comment
Browse Our Archives
Related posts from Cultivare