Who Do People Say That I Am? 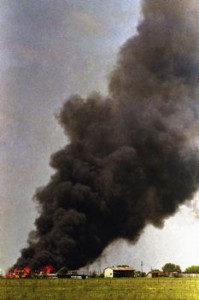 I came across a fascinating, and disturbing, retelling of the 1993 Waco debacle written by best-selling author Malcolm Gladwell. Remember Waco? The FBI fatally stormed a compound occupied by a religious cult called the Branch Davidians led by a crazy man named David Koresh. Gladwell based his article in The New Yorker on a recent memoir by one of the survivors. I remember being mesmerized by the lengthy standoff between the FBI and the Davidians, disgusted by reports of David Koresh as a polygamist, munitions stockpiler and self-proclaimed Messiah, bewildered by the weeks of futile negotiations during the standoff, and then horrified when the FBI moved in, igniting a fire that led to 74 people dead, 25 of them children. Gladwell informs that Koresh and the Branch Davidians were in fact not a cult, but a Seventh-Day Adventist spin-off that interpreted the Bible and its end times predictions as true gospel. Bible-believing millennialists. Koresh justified his polygamy by a strict reading of the Old Testament. This being Texas, the group had a few guns, but there was no munitions stockpile as the government accused. Gladwell concludes that negotiations failed, and the FBI ruinously overreached, because the law of the land didn’t know how to deal with devout believers.

Gladwell writes, “Mainstream society finds it easiest to be tolerant when the outsider chooses to minimize the differences that separate him from the majority. The country club opens its doors to Jews. The university welcomes African-Americans. Heterosexuals extend the privilege of marriage to the gay community. Whenever these liberal feats are accomplished, we congratulate ourselves. But it is not exactly a major moral accomplishment for Waspy golfers to accept Jews who have decided that they, too, wish to play golf. It is a much harder form of tolerance to accept an outsider group that chooses to maximize its differences from the broader culture. Americans aren’t very good at respecting the freedom of others to be so obnoxiously different.”

Still, aligning David Koresh with Jesus is never a good idea. Jesus possessed neither wives nor guns. I survive my faith the way most reasonable and conventional Christians do: I align Jesus with me. I project my own values and attitudes so that my Lord and Savior mostly looks just like I do. Liberals portray Jesus with progressive values, conservatives have him being conservative. He’s a radical for the radicals, a corporate CEO for business types, a university professor for academics. Describe Jesus in your own words, and he’ll likely sound a lot like yourself—with your same priorities and values and friends and enemies. Of course, you’ll assume it’s really you resembling Jesus and not the other way around.

April 16, 2014 A Very Difficult Teaching
Recent Comments
0 | Leave a Comment
Browse Our Archives
get the latest from
Evangelical
Sign up for our newsletter
POPULAR AT PATHEOS Evangelical
1