Tomorrow I make my way to Copenhagen to participate in a conference at the University of Copenhagen’s Kierkegaard Research Centre. The conference is titled: “Kierkegaard Sources and Reception: The State of Kierkegaard Studies Today.” (click the link to view the schedule). The occasion of the conference is to celebrate the 2/3 completion of a massive research series, called Kierkegaard Research: Sources, Reception, and Resources (Ashgate). The “Sources” and “Reception” volumes are completed and available for purchase. My talk, “Kierkegaard Among the Theologians” represents the Modern Theology volume in the Reception series. The three “tomes” that comprise the Modern Theology volume are a terrific resource for understanding the flow of modern theology through the lens of Kierkegaard’s influence. In order to spice it up a bit, I have given my talk a subtitle: “The Modern Theology Cocktail Party.” If that intrigues you, here is a (longish) paragraph from the introduction:

What does Kierkegaard “among the theologians” mean? If we can stick with my drinking analogy, (an unusual strategy for an American evangelical), think of modern theology as a “cocktail party.” Imagine a room filled with European and American Catholics, Jews, and Protestants, discussing the knowability of God, the dialectic of faith and reason, essence and existence, being and Being, estrangement and desire, sin and finitude, church, Christ, and 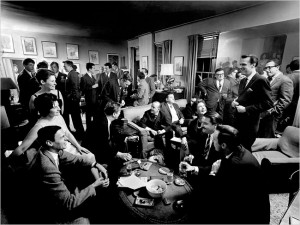 culture. Here enters Kierkegaard, with his awkward gait and mischievous sneer. What do these austere, churchly theologians think him? In one sense, he is very much one of them. He shares their concerns about the deep questions of human existence, the relation (or gap) between reflection and reality. He shares their grasping at God (or at the idea of “God”), their preoccupation with finitude and sin—and the dialectic of the finite and the infinite. And of course the Bible—biblical themes and figures, as well as direct comments on the Bible itself—pervade his writings. In these respects, he looks and talks like a theologian. He seems to belong here. But there is an obvious social awkwardness to him as his mingles “among the theologians.’ He doesn’t share their propensity to systematizing (he is too fragmented), or their straightforwardness (he is too ironic and indirect), or their preference for dogmatics (he is too philosophical and psychological), or—for some of them anyway—their theocentricism (he is too anthropocentric). But they are intrigued with him. They can’t look away, as he bounces from group to group, telling stories, parables, jokes—and prefaces, lots of prefaces! The theologians are a bit like the apostle Paul’s audience at Athens—some have bought in completely—they are converted—others are intrigued, wanting to know more, while a number of them walk away in disgust, wondering to themselves and to each other, “Who invited this babbler?”

To hear the rest, you’ll have to join me in Copenhagen.

April 30, 2014 Would a Clone Have a Soul?
Recent Comments
0 | Leave a Comment
"What do you folks think of this one?-- Quoted from News4JAX -- 11/25/16 --"JACKSONVILLE, Fla. ..."
y3shuA imMANu3l Divine Intervention vs Divine Involvement
"So Melville traveled to Jerusalem in an effort to recover his Christian faith...hmmm, interesting, but ..."
Gregg Thomas Melville’s Epilogue
"I fail to see how Holbein's work 'deprives the Christian of hope' any more than ..."
Joseph The Dark Light of Thomas Kinkade
"You’ve written nice post, I am gonna bookmark this page, thanks for info. I actually ..."
Marc Barber The Dark Light of Thomas Kinkade
Browse Our Archives
Related posts from Cultivare