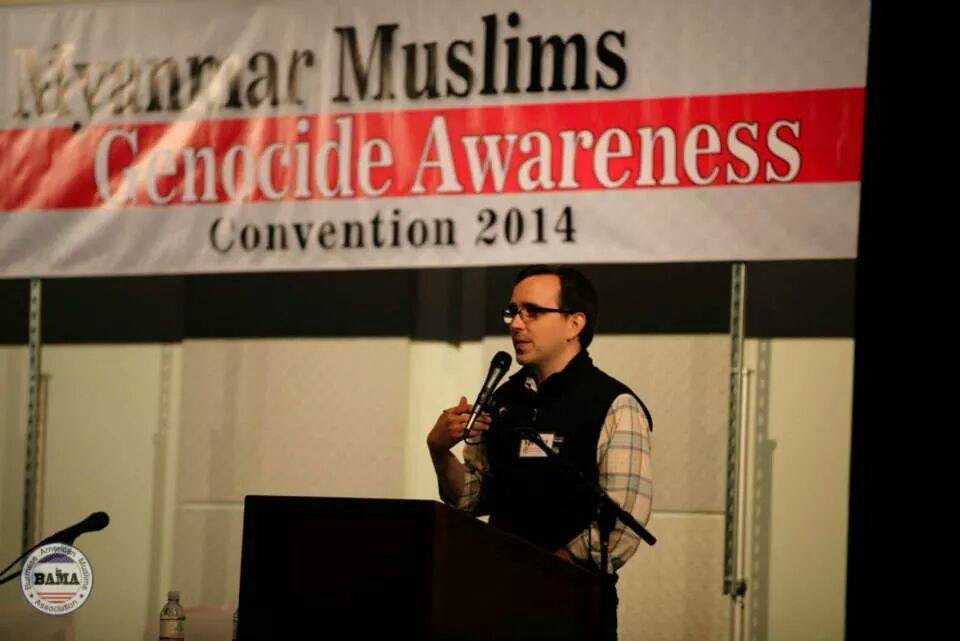 As I mentioned in a past post, I was one of the speakers at this year’s Myanmar Muslims Genocide Awareness Convention 2014, which was held at the Los Angeles Convention Center this past Saturday.

(As regular readers may remember, I wrote a special report for this blog about the Myanmar Muslims Genocide Awareness Convention 2013. You can read that post here.)

The event was described this way by the organizing Burmese American Muslims Association:

The conference attempts to address the enormity of violence against Rohingya and Burmese Muslims, the largest and deadliest conflict in Burmese history. Deliberately launched for so-called racial purification of “Burmese blood”, nationalist movement spearheaded by monk Wirathu is orchestrating brutal campaigns of hate speech, expulsion, persecution and atrocity. As the current state of fear mongering and lack of global condemnation provide these killers with both a cover and an excuse, the crimes are justified with familiar arguments about the need to defend the home-land.

We seek to identify and understand how state-sponsored programs of violence and atrocity function. Who are involved and in what ways? What motivates those people to behave as they do? How—through what processes—do large numbers of people, some of them “ordinary,” some less so, become murderers of larger numbers of ethnic people? Mr. Tomas Ojea Quintana (United Nations Human Rights Rapporteur on Myanmar) recently spoke up about ongoing segregation, restriction on healthcare and “pattern of systematic discrimination”.

No acts of revenge or restitution could make up for the deaths of thousands, the annihilation of Rohingya life in much of Burma, the destruction of property, and the shattering of trust and coexistence. Nevertheless survivors have to begin new lives, and for that they require at least minimal material resources, some acknowledgment of their suffering, and a measure of confidence in the world around them.

Join with other local activists, scholars and concerned international diplomats at the conference,  and discuss the patterns of genocide and prevention methodologies. We have reserved 600+ large hall and it is open to public.

You can watch video of the entire event below, as well as video of just my contribution.

June 23, 2014
My Breakfast Featured on Academic Breakfast!
Next Post

June 30, 2014 "History (or Her-story) of Women in Buddhism" with Ayya Tathaaloka
Recent Comments
0 | Leave a Comment
Browse Our Archives
Related posts from Off the Cushion