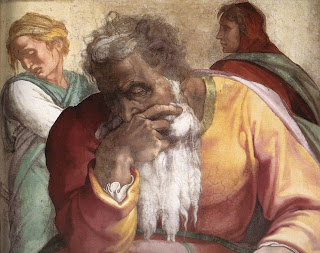 Reading through each of the prophetic texts of the Bible, the common denominator in terms of Israelite prophetic concerns is clear. Prophets were highly vested in what we often today refer to as “social justice.” They believed that the establishment of “justice and righteousness” (a dual term used throughout the ancient Near East for something similar to the modern concept of “social justice”) was the purpose of Israel’s existence (see also Isa 5:7; Jer 4:2; 7:5-6; 22:3-4; Ezek 18:5-9; Micah 6:8; Zech 7:9-10).

Biblical prophets felt deeply concerned over the distribution of wealth in the covenant community, and the moral need to take care of the poor and needy. The call to liberate the financially enslaved is therefore characteristic of the prophetic call for social reform. We see this theme, for example, articulated in the oracles of Micah who condemned the government of his day for failing to properly care for the poor in Israel:

“Hear this, I pray you, you heads of the house of Jacob, and rulers of the house of Israel, that abhor justice, and pervert all equity. . . Assuredly, because of you Zion shall be plowed as a field, and Jerusalem shall become heaps of ruins” (Micah 3:9-12)

For Micah, the rulers of the house of Israel had perverted the way of God by failing to create an environment conducive to maintaining financial and social equity. As a result of this perversion, Jerusalem, Micah prophesied, would be destroyed.

This same message that the covenant community needed to eradicate financial inequality and debt-slavery appears time and again throughout the Hebrew Bible, but especially in the prophetic books. “The prophets had a tradition about justice from the Near East and from Israel’s law codes,” writes one biblical scholar, “but the crisis of oppression of their own time produced indignation in them unlike anything in the old material; that indication resulted in more frequent and more fervent cries for justice than had existed before.” (1). This explains why we see prophets constantly critiquing the wealthy, political leaders (including the king) in both Israelite and Judean societies.

Although this call for social justice appears as a constant prophetic concern, it is perhaps best illustrated through the oracles attributed to the prophet Amos.

The prophet Amos was a resident of the southern kingdom of Judah. Amos 1:1 states that he came from the city of Tekoa, a community about five miles southeast of Bethlehem in the highlands of Judah. The text states that Amos was a noqed, a term that means sheepherder and there is some speculation that this may have been a technical term for a sheepbreader who cared for the temple flocks used in sacrificial rituals. Amos, however, did not prophesy to his own people, at least there is no historical indication that he did. Instead, Amos left his home in the southern kingdom of Judah to present his prophetic messages to the people of the north.

To put this into a contemporary perspective, this would be like a person from the deep American south traveling up to Canada to tell the people that they weren’t living right. It’s amazing that the Israelites paid Amos any attention. But they did. In fact, scribes in the north wrote down the harsh words spoken against their community and these oracles were eventually taken by northern refugees down to the kingdom of Judah after the Assyrian conquest of Israel in 721 B.C.E.

We learn from the introduction to the book that Amos was active during the reigns of Kings Uzziah of Judah and king Jeroboam II of Israel (1:1). The rule of these two kings largely overlapped historically, and though the exact time of their reigns is uncertain, the years 790-740 B.C.E. are a good estimate. These were great years for the Northern kingdom of Israel in terms of financial prosperity. In an effort to account for this well recognized success, the author of the Deuteronomistic History suggested that “the LORD resolved not to blot out the name of Israel from under heaven; and he delivered them through Jeroboam son of Joash” (2 Kings 14:27; JPS).

Studies suggest that the population in the eighth century reached approximately 350,000 in number and that the upper class achieved considerable wealth by participating in the growing Assyrian economy producing and distributing olive oil. However, from Amos’ perspective, when the elite prospered, they did so through exploiting the poor. The northern kingdom of Israel was a society split between the “haves” and the “have-nots.”

As readers, however, we’re not told who Amos was the son of, which leaves us with a mystery. Why was Amos’ father not named in the account? Was Amos’ father so unimportant that he was not worth mentioning? Did Amos even know who his father was? Was Amos, therefore, of the lower class in the southern kingdom? He tells us that he was a cattle breeder and a tender of sycamore figs to whom Israel’s God spoke saying, “Go prophesy” (7:14-15).

But perhaps, this tells us enough.

The sycamore fig was the food of the poor. Amos may have been a seasonal worker hired to labor in sycamore industry. He may have been a type of priest who left his profession as a sheepherder due to his concerns over the way the religious elite took advantage of others. We really cannot say. Whatever his own professional background, Amos felt compelled to head north and assume the prophetic mantle to champion the cause of those who subsisted on the sycamore figs.

His initial oracle against Israel articulates Yahweh’s anger with the covenant community:

“Thus said the LORD: For three transgressions of Israel, For four, I will not revoke it: Because they have sold for silver those whose cause was just, and the needy for a pair of sandals. Ah, you who trample the heads of the poor into the dust of the ground, and make the humble walk a twisted course!” (Amos 2:6-7; JPS).

The northern kingdom of Israel had grown exceedingly prosperous. But from Amos’ perspective, they had done so by pushing the heads of the poor and needy into the dust and neglecting their needs. For this sin, Israel would face the wrath of a deity who felt compelled according to the biblical prophets to champion the cause of those in financial bondage.

“Hear this word, you cows of Bashan on the hill of Samaria,” declared in reference to the upper class. “Who defraud the poor, Who rob the needy; Who say to your husbands, ‘Bring, and let’s carouse!’ (Amos 4:1; JPS). With this accusation, Amos employed the standard biblical prophetic tradition, comparing the covenant community to wicked women who take advantage of their husbands’ charity.

Yet Amos also compared the community to Pharaoh for just as the king of Egypt had enslaved Israel as workers, so had the wealthy enslaved the working class by taking advantage of their labor to line their own pockets:

“Hear this word, O people of Israel, That the LORD has spoken concerning you, Concerning the whole family that I brought up from the land of Egypt You alone have I singled out Of all the families of the earth — That is why I will call you to account For all your iniquities. . . Proclaim in the fortresses of Ashdod And in the fortresses of the land of Egypt! Say: Gather on the hill of Samaria And witness the great outrages within her And the oppression in her midst. They are incapable of doing right — declares the LORD” (Amos 3:1-2, 9; JPS).

From Amos’ perspective, the covenant community was repeating history. Yahweh had liberated Israel from bondage and now the elite were placing the population back into slavery. Israel’s upper class had assumed the role of the oppressor rather than the oppressed.

The existence of the covenant community, from Amos’ perspective, was to establish social justice by eradicating economic oppression. Israel was called to “let justice well up like water, righteousness like an unfailing stream” (Amos 5:24). And God, the champion of the poor, did not take their failing to do so lightly. However, as helpful as it is for illustrating this theme, Amos’ example of a prophet focusing upon Israel’s responsibility to foster financial equity is far from unique. From Amos in the north to Isaiah in the south, we find biblical prophets constantly compelled to call the covenant community to repentance for not living up to their religious charge to eradicate poverty and to care for those in need.

December 30, 2014
A Response to My Friend Daniel Peterson
Next Post