Born to Die?: Why the Cross Doesn’t Belong at Christmas

Yesterday, I passed a church sign that proclaimed Christmas was the story of a baby born to die. It seemed a macabre, odd way to wish passersby a merry Christmas. Apparently, though, quite a few Christians root the story of Jesus’ birth in his death, as if they are determined to nestle the cross into the manger’s hay, right next to Jesus.

But Jesus was not born to die. He was born to live.

At first, I thought I was angry at the theological ineptness of this trend of making Christmas about the cross and its fundamental misunderstanding of the point of the incarnation.

But then, I realized I wasn’t feeling anger. Rather, it was sadness.

I was sad that anyone could look at the infant Jesus, still coated in vernix caseosa, and see only his death.

I was sad that anyone could read the radical story of a baby in a manger and think only of a cross.

I was sad that anyone could reduce the mystery of incarnation to the tragedy of crucifixion.

I was sad because of what it said about who people think Jesus is. It says that Jesus was a dumb lamb, carefully cultivated as pure and blameless, so that God might have him slaughtered to set things right in the world.

But it wasn’t his death and crucifixion that set things right in the world. Rather it was his incarnated life that shows us what a world set right might look like. It looks like the kingdom of God — the hungry fed, the wealthy and powerful doing violence for their own sake toppled with nonviolence and solidarity, the oppressed raised up, the outsider welcomed, the end of condemnation and guilt pressed upon us by religious elites, the end of a life absent of hope, full of death.

And Jesus proclaims that this eternal life begins now, not when we die; that heaven is a place called earth, if only we have the eyes to see it and the courage to live it.

So how is it that we can trade three decades of a redemptive, tragic and revolutionary life for the final three days? How can we reduce the transfiguring life of Jesus to a transactional death?

Because we don’t understand salvation.

The salvation Jesus offers is his life, not his death.

The point isn’t the crucifixion, or the resurrection for that matter. Rather, it’s the incarnation. Our creed proclaims as much: “for us and for our salvation, he came down … and became incarnate.” That’s why the cross doesn’t belong in the Christmas story. That’s why Jesus wasn’t born to die. The cross wasn’t predestined so sinless human sacrifice would eventually allow an angry God to forgive sinful humanity. Rather the cross was human reaction of powerful oppressors to Jesus’ radical message of liberation and justice.

So, the point isn’t that Jesus died for us.

It’s that he lived for us.

Dying for others isn’t nearly as hard as living for them. Remember, there is no greater love than the one who lays down his life for others.  But this verse from John’s gospel isn’t about the crucifixion and martyrdom. It’s about how we live our lives outside the grips of petty selfishness and into the wholeness of community. It’s about relinquishing our claims to care only for ourselves and our own well-being, about giving up our right to retaliation in favor of reconciliation, about forgiving others, about forgiving ourselves.

It’s about seeing others as brothers and sisters to join hands with rather than as competitors and enemies to wrestle with. It is about opening our clenched fists so that all have enough and so that none have too much.

The salvation of Jesus is in the Way he lived. It’s in his proclaiming and incarnating — living! —  the good news that God loves us, that God is with us, that a better world is possible, that there is hope when all hope fails.

And that hope is here on earth, in us and with us.

Christmas reminds Christians that hope can come anywhere and in the most unlikeliest of places. And wherever that hope comes from — a baby born among beasts of burden to an unwelcomed, suspect girl perhaps — we hold onto it during dark, cold nights, refusing to let the specter of death diminish the beauty of this moment of life.

This hope is the star, the spark of divinity, that pierces the pitch black.

Death is inevitable, but this is the hope of the incarnation: that life happens, that eternal life happens, and that it happens right now. 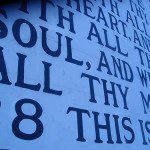 October 11, 2012
When Jesus Invented a New Commandment
Next Post