Holy Saturday and Harry Potter: On Tombs, Thestrals, and the Descent into Hells

In Harry Potter and the Order of the Phoenix, author J.K. Rowling introduces readers to one of the singular best magical creatures ever created — the thestral.

These magical creatures — compared to something like skeletal horses — are invisible to most, save those who have looked upon death, understood it and internalized it. Thestrals are visible, in other words, only to those who have been baptized into death. They are terrible, frightening looking creatures, and when Harry first sees them, his friends — who have not borne witness to death — cannot.

These creatures come to mind every Holy Saturday for me — the day when Christians believe Jesus was still in the tomb. We have, on the previous day, gazed upon death, entered into it, and experienced it, as we remembered and marked the death of Jesus in crucifixion.

And on Holy Saturday, we internalize it. We come to grips with the silence of the grave. It is a day for thestrals.

On Saturday, we are buried with Christ. It is a day where we can admit the sometimes creeping hopelessness of our world. It is a day in which we can be baptized into Jesus’death. It’s no wonder that the earliest Christian traditions surrounding baptism happened on this day — at the end of Saturday — the day of the tomb — and the beginning of Sunday — the day of resurrection.

Jesus, today, is in the places of the dead. He is at the funerals of those killed by hate, those executed and imprisoned unjustly by the state. He is in the Syrian refugee camps. He is with the gay and lesbians in Uganda being persecuted and killed. He is with people who are hungry, who are homeless, and who are hopeless. He is with those whom the world has forgotten, whom the powers that be have oppressed, whom life has thrown away as disposable.

Jesus is in solidarity with the places of the grave in our world, and he calls us to follow him there, to be baptized into this death, to bear witness to the death in the world, and, then, to allow that death to transform us into people who can see thestrals, too.

To allow the tombs to transform us into people of the resurrection.

This article first appeared as part of The God Article’s excellent Holy Week devotions. Check out all the excellent work of them, and my other devotion in the series on Judas. While you’re there, subscribe to receive e-mails from The God Article. 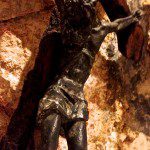 April 17, 2014
Disciples in the Darkness: Joseph of Arimathea, Loss of Meaning, and the Last Words of Jesus (A Good Friday Homily)
Next Post

April 28, 2014 Why Sarah Palin is Right About Baptism by Waterboarding — #AmericanBaptism
Recent Comments
2 Comments | Leave a Comment
Browse Our Archives
Related posts from Edges of Faith