Picking Sides: The Deciding Reason Why I Was Baptized in the Episcopal Church (Guest Post)

Picking Sides: The Deciding Reason Why I Was Baptized in the Episcopal Church (Guest Post) June 10, 2014 David Roberts

This past Sunday on Pentecost, baptisms were celebrated all across the Christian world. It’s a traditional day for baptism, and today, I’m honored to share one touching and poignant story of baptism from a reader, T.R. Sherrill (also a listener to The Moonshine Jesus Show).  — David

Jesus said, “Let the little children come to me, and do not hinder them, for the kingdom of heaven belongs to such as these.”
-Matthew 19:14 (NIV)

My mother and my father were an interesting pair.  My father was raised in a Polish-American Catholic home, the eldest of six children, five of whom were boys.  My mother was raised in a casually Christian household, also of six children.  At my mother’s baby shower for me, her sisters-in-law, each of whom had either been raised Catholic or converted to Catholicism when they married into the family, gave her a beautiful, ruffled and laced Christening gown for baby Matthew/Tanna. (I had been too shy during the ultrasound to reveal my sex, perhaps as a sign that, even in utero, I did not want to be defined too strictly by my genitalia…) My mother, unfamiliar with the practice of infant baptism, asked what the gown was for.  One of my aunts informed her it was for the baby to wear during its Christening.  The ladies in the room were suitably aghast when my mother stated that she would not force me to belong to any religion, that when/where/if I would be baptized would be my choice, and that I would decide what to wear when the day came.

“But Lisa!  What if the baby dies without being baptized? Only those who have been baptized get into heaven.”

My mother, in classic form, let the ladies be upset and stuck to her guns anyway, and I was not baptized as an infant.

My parents never forced me to go to church.  My mother has never been a regular churchgoer due to her lifelong penchant for working second and third shift jobs.  My father, devout though he was, felt that it would be unproductive to try and “make” me get up, get dressed, and go to church.  He felt it would just foster resentment on my part.

I was a daddy’s girl, though, and I wanted to go where he went and do what he did, so I often did get up early on Sundays, get dressed, and go with him to church. We alternated between denominations, usually visiting Catholic, Episcopal, and occasionally Lutheran or Methodist churches. Those early excursions into the Lord’s House are somewhat fuzzy in my memory: I have clearer memories of going out to breakfast after the services. My father brought me up to the rail whenever I was with him, and instructed me to cross my arms over my chest so I could be blessed.  He explained that, until I was baptized, I wouldn’t be able to eat the bread or drink the wine.  Eventually, though, my Daddy’s girl instinct won out.  I decided this Christianity stuff made sense and that if my father belonged to it, I wanted to as well.  I told him I thought I was ready to be baptized.

He, my mother, and I sat down to discuss it, and my father explained that I needed to pick which church I would belong to.  We had narrowed our Sunday wanderings to the grey-stoned Immaculate Conception Roman Catholic church and the red-brick Grace Episcopal church, which were right across the street from each other.  The Catholic church was larger and more grandiose.  I loved the pink satin draped around the statue of Mary.  The Episcopal church was smaller, but had better food and a friendlier, younger priest.  The services weren’t that perceptibly different for me, so I asked my father to describe the differences between the churches.

He explained to me that the Catholic church had a pope who was kind of like the “president of the church” and set the rules for the church.  He told me that the current pope was from Poland, like my great grandmother.  He told me that in the Catholic church, only men could be priests, and if women wanted to work for the Church, they could be nuns, but nuns couldn’t do as many things as priests could.  In the Episcopal church, there was no pope, and women could be priests and do everything men could do… they could even be bishops!

I was no great theological mind at six years old (Indeed, I’m certain I am still no great theological mind) but it seems contrary to the idea of a catholic (read: universal) faith that not everybody who was so inclined and led by the Spirit to serve God in his church would be able to do so in all the same ways.  I told my father that I didn’t think that was fair, so I supposed I would rather be a member of the Episcopal church.

In due time, I learned my catechism and picked my godmother.  One bright, sunny day in the Spring, I donned a pink, ruffled, lacy gown.  My mother and my father and my grandfather and my godmother all came to church, and continuing the service as beginning on page 299 in the Book of Common Prayer, I was baptized. 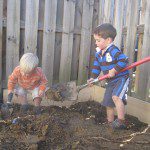 July 5, 2014 Dirt is Resurrection and God is a Bad Farmer (Homily for the Parable of the Sower)
Recent Comments
1 Comment | Leave a Comment
Browse Our Archives
get the latest from
Progressive Christian
Sign up for our newsletter
POPULAR AT PATHEOS Progressive Christian
1