An Ancient Prayer Saved My Faith

This is a late contribution for my friend Ed Cyzewski’s synchroblog celebrating the release of his new book A Christian Survival Guide.

An ancient prayer saved my faith.

A friend in college had invited me to attend a nearby Episcopal church. It was a disorienting place with its vaulted ceilings, stone columns, and ornate stained glass. Even more so were all the books I had to keep up with, the strange customs, and the weirdly dressed parade that began the service.

It was strange. And beautiful.

Unlike any prayer at all.

He said what I later came to know as the Collect for Purity.

All I knew at that moment, though, was that this was the most beautiful prayer I’d ever heard.

All I knew was that it had given me words to pray, something I thought I had forever lost.

All I knew was that I didn’t feel alone any more.

The priest prayed, “Almighty God, to you all hearts are open, all desires known, and from you no secrets are hid: Cleanse the thoughts of our hearts by the inspiration of your Holy Spirit, that we may perfectly love you and worthily magnify your holy name through Christ our Lord. Amen.”

At that moment, I knew I was an Episcopalian.

I will never forget that moment.

But it was not the last time the liturgy saved my faith.

My faith was saved, again, that first time I blessed bread and wine, and realized I had come home after wandering so long. And in countless celebrations since, I’ve had my faith saved in the blessing of bread and wine, when something more than I can ever imagine or pretend happens, when simple things become holy things, revealing that all simple things are holy things. Like the oily mark of Chrism on an infant’s head, on a teenager’s forehead, the weight of a stole and chasuble, the new light in the darkness of an Easter Vigil.

I’ve had my faith saved by confessing from the pulpit all those times I lost my faith and how God was in that too.

I’ve had my faith saved by the Altar Guild, who love the Table more than anyone else in the church and have passed on their reverence to me like a cherished heirloom through their gloved hands grasping brass candlesticks and through sharp creases on purificators.

I’ve had my faith saved by the people who forgive my learning curve as young priest.

I’ve had my faith saved by the liturgy.

But it’s not just some words on the page in a church.

I’ve had my faith saved by what the liturgy actually is.

The work of the people who love God.

And my faith is saved every time I remember I am one of these people and that we are working together in this messy business of living out God’s love.

Because in the end, that’s what the Collect for Purity is al about.

It’s about being known for who we really are — our secrets, our desires, our hiddenness — and being loved for it anyway and being transformed because of it. 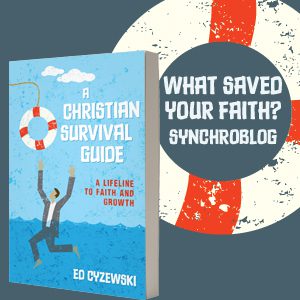 Check out Ed’s book, and add your thoughts about what saved your own faith?

August 27, 2014 #IfTheyGunnedMeDown, Who Do You Say that I Am?
Recent Comments
3 Comments | Leave a Comment
Browse Our Archives
Related posts from Edges of Faith