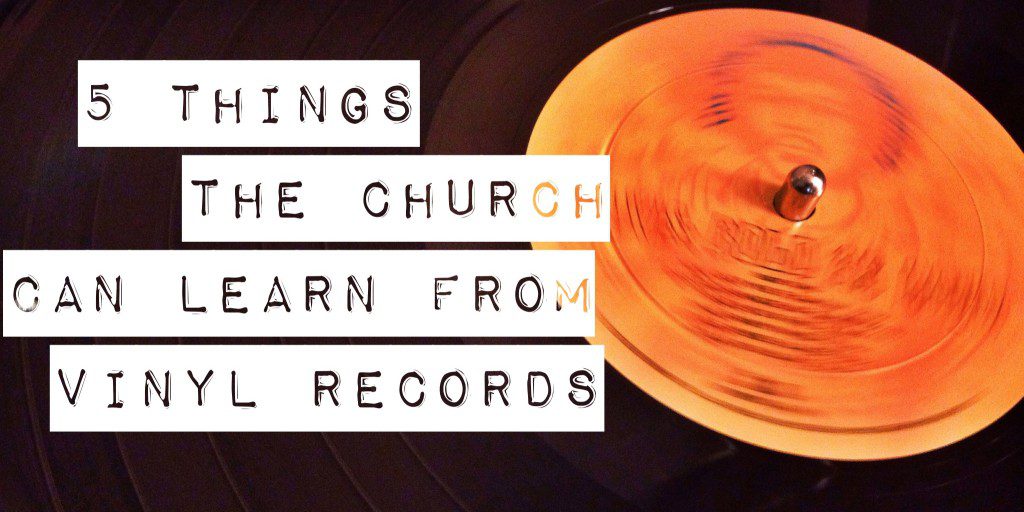 It’s not just for hipsters any more.

And Christians ought to listen up, because the future of the church might just be reflected in the resurgence of vinyl records.

In many ways, the music industry reminds me of the modern church. Like the church, its leaders fret about its future in the midst of dramatic cultural shifts. As with the church, there is vocal concern that death is imminent unless something drastic changes.

And in both, there are anomalous bright spots, beacons of hope, found not in the newest and glitziest gimmick of consumption but in something a bit older that had been ignored by the mainstream during previous decades.

In the past year alone, vinyl records hit historic sales highs not seen in 20 years and vaulted into mainstream culture. No longer are vinyl records confined to hipster secondhand shops in gentrified neighborhoods. Rather they can be found in almost every major city thanks to massive chain stores like Barnes and Noble.

So even as music sales have plummeted in the digital era, vinyl has become one of the pieces of good news in the industry.

So what’s behind this resurgence and what can the church learn from the record industry’s great vinyl hope?

A whole lot on both counts.

Now, audiophiles will tell you a record offers better sound, a depth of music that is lost in a digital music file. And, though I agree to a certain extent, I’m not convinced most folks can really tell the difference in sound quality between digital and vinyl.

As a result, I tend to think other things are at work here, elemental things almost, and the church would do well to listen.

1. Vinyl invites us into ritual and into a feast for the senses. Vinyl records aren’t just about the music and the better sound. Maybe that’s part of it, but many records are simply digital masters pressed onto vinyl. Regardless of the sound quality, however, there’s still the ritual of playing vinyl that makes it so attractive for many.

There’s the feast of detailed album artwork that isn’t condensed into a tiny thumbprint on a screen. The feel and heft of the record as it slides from the sleeve into the hand replaces the ghostly scrolling of phantom albums on a phone. The delicate care taken with the vinyl as it’s placed on the record player. The crackle-and-pop as the needle finds the groove and the first song. The faint, but clear smell of just-played vinyl as you slide it back into its sleeve.

Vinyl records, like our best liturgies and rituals, engage not just one sense but all of them, not just part of ourselves, but our whole selves. Digital music is about what happens when sounds come out of earbuds, directly into your ears, bypassing all other parts of your body. Vinyl engages your entire body, sight, smell, and touch first, before finally arriving at the sound of the music itself. This, of course, is exactly what good liturgy and ritual does, leads us to the sublime through our entire bodies. So it’s no surprise to see something of a return to and desire for liturgy, even among churches that had previously eschewed it and especially among disaffected evangelicals.

2. Vinyl is an invitation to slow down and savor. Vinyl isn’t portable. In the portable digital era, music has become an exercise in mass consumption. Our favorite songs have become little more than personal soundtracks, noise humming in the background of busy lives. But vinyl invites us to sit, slow down and savor the entire album instead of simply clicking through to our favorites or pressing play as we rush around the city.

There is no shuffle button on vinyl. The medium sees the entire record as a whole, unlike the digital medium that is frequently more about the individual song, singles and favorites to skip to. It’s not about consuming the high points, but savoring the entire album and allowing the deep cuts to slowly work on you.

This is exactly what the Christian year invites us to do, to slow down and savor the entire year, not simply to rush to the high holy days and celebrations. Like listening to vinyl, it asks us to be fully present and wholly attentive to where we are at that moment even if we aren’t particularly fond of that moment. It invites us to wait and to wade through the quiet, contemplation of Advent and to examine and repent during Lent, before rejoicing in the birth of Christ and proclaiming resurrection. Those are the deep cuts of the Christian life — Lent and Advent — that, over time, work on us and become treasures in their own right.

3. Vinyl records will stop working if treated poorly. In an era of mass consumption and Internet celebrity, the church has too often drifted heavily into cults of personality. Many of these leaders have developed reputations for abuse. This has resulted in a broken faith in religious institutions and a general disenchantment with faith altogether. Vinyl, of course, reminds us that if we mishandle what we love, even accidentally, it will stop working. It will chip, warp, and become distorted. How many churches have experienced this exact dynamic with either abusive or inept leaders? 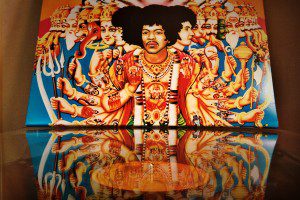 4. Vinyl is an exercise in nostalgia. Embrace it.  Nostalgia sometimes gets a bad reputation it hasn’t entirely earned. It’s posited as a drag on creativity and symbol of reluctance in the face of a changing future. Calling something nostalgic can be a sly way of dismissing it without considering the value of that which came before us. Of course, in another era, less intoxicated with the new, the clever, and the young, we might call nostalgia by another name: tradition.

To me, vinyl is a reminder not to kick a previous generation to the curb just because certain things have fallen out of fashion. There is deep wisdom to be shared instead. When I started listening to vinyl, I had to approach older people for help. Having never owned a vinyl record before, I didn’t know how to care for vinyl, how to handle without scratching it, or what record from the past might be a completely transcendent experience to listen to on vinyl. In short, by listening to them, I learned how to treat vinyl well and sought out albums I had brushed off when surfing iTunes. The other happy discovery, of course, was finding all the people who had never stopped listening to their vinyl albums in the first place or were sitting on massive collections that had spanned lifetimes and were eager to share.

As a church, we tend to think the future is in the young and in luring kids, teenagers, and young adults back into our parishes. The future of the church isn’t in the youth, it’s in all of us across generations coming together and doing a few things well and with great love.

Which leads to my last point.

5. Be selective, and love what you have. The first thing I noticed when I got a record player is that a good vinyl album costs more than a digital download.

So I was forced not to grab the latest or to buy an album on impulse as I was used to doing with digital music. With an iPhone, I knew I had the space, whether on my phone itself or in the cloud. There was no reason to limit myself arbitrarily. Vinyl, on the other hand, forced me to carefully consider what I wanted to buy and why I wanted to buy it. In the church, we’d call that discernment.

In our consumer culture, the temptation for churches is to try to be all things to all people. To offer a little bit of everything for everybody. While laudable in theory, the result frequently is a busy church that does many things throughout the year, but few of them well.

Vinyl reminds us that it is more important to curate what we do with care and with love than it is to collect as much as we possibly can simply because we might be able to. Truth be told, I’d rather have 10 or 15 albums on my shelf that I love passionately on vinyl than the 60 or 70 in my digital library that I can scarcely remember purchasing much less listening to attentively.

Because it invites me to sit, to breathe, and to listen in the moment rather than bombarding me with noise and choices.

One invites me to be still.

Now, by know means is this a comprehensive list. And by no means will vinyl records single-handedly save the music industry. Vinyl still represents a tiny fraction of overall sales. The same might be said of the church, its liturgy, and tactile rituals. Of course, a church has to live within the digital era, engaging people online and with a consistent Web presence.

But more and more frequently, I read about young adults and 20-somethings who fall in love with or prefer the tactile for what saves their souls — whether that’s real books, vinyl music, or a thurible of incense and a chalice of wine.

I can’t help but think the future of the church might surprise us. It might have less digital than we would expect and more vinyl than we could imagine.

February 23, 2015
From 'I Do' to Disfellowship: Why the Southern Baptists Kicked this Church Out Over a Same-Sex Wedding
Next Post