Meet the priest who's "one of the most dangerous people in town" May 29, 2011 Deacon Greg Kandra

And he’s been called that because of ardently pro-Catholic letters he writes for the hometown newspaper in Minnesota.

From the Duluth News Tribune:

Every 30 days or so he and his opinions are published in the letters to the editor section of the News Tribune. He’d be in more often if we let him, no doubt, if we didn’t insist writers wait at least a month between submissions to give others a chance to have their words read.

For half a century, Father Richard Partika — “Father Dick,” to his friends — has been writing, and sometimes ranting, to the paper, making his a household name across the Northland and leaving him with a reputation as a fiery, never-back-down individual.

Or as something less polite: “Partika is one of the most dangerous people in this town,” an angry newspaper reader once wrote in an e-mail that found its way back to Partika.

So just who is he, the man behind all those letters?

I know I’ve wondered, especially after once being told Partika grew up in a Duluth orphanage. In March, when Partika announced in a letter (how else?) that he was suffering the early stages of dementia, I requested an interview.

He met me in the lobby of the Westwood Apartment building, a commanding brick structure at the southwestern end of the College of St. Scholastica campus. A four-room apartment has been his home there since June 2000. He has it decorated with religious statues and with photocopies of old family pictures that he tacked to the walls. Piles of papers cluttered most flat surfaces, including near his well-worn typewriter.

I sat down. The homily began.

May 29, 2011 Did they sing "God Bless America" at your church this weekend?
Recent Comments
2 Comments | Leave a Comment
Browse Our Archives
get the latest from
Catholic
Sign up for our newsletter
POPULAR AT PATHEOS Catholic
1 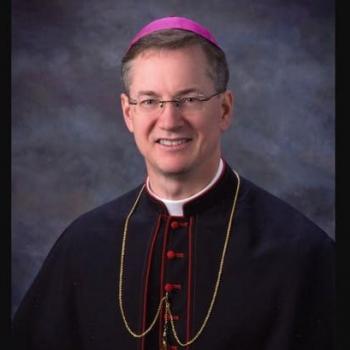