Quote of the day

“Priests who engage in lewd conversations with teenagers are suspended from ministry for committing a ‘boundary violation,’ and are charged with sexual abuse.

But Rep. Anthony Weiner can send pornographic images of himself to young girls and he is free as a bird. Indeed, the majority of New Yorkers say he should not resign…

…If the guilty party were Rev. Weiner, he would be sanctioned by the Catholic Church’s “zero tolerance” policy. But because he is Rep. Weiner, there are no penalties.

As usual, it’s not the offense that matters—it’s the status of the offender.”

June 9, 2011
In Detroit, "two competing visions of the Church's future"
Next Post

June 9, 2011 The astonishing story of a woman who forgave her son's killer
Recent Comments
27 Comments | Leave a Comment
"I think I would have been happier had the CDF handled the nuns the way ..."
Theodore Seeber Vatican challenges “interpretation” of cardinal’s remarks ..."
"Blaming "Islamics" for this is like blaming the Pope for the Holocaust Denial of Hutton ..."
Theodore Seeber One killed, 44 injured in Catholic ..."
"It smacks to me of hyper-sensitivity, a veiled spiritual and intellectual pride, with regards to ..."
J D Pope Francis: “A Christian who complains, ..."
"Oh, no, we never change our mind, and we always agree, even on points of ..."
Ron Chandonia Vatican challenges “interpretation” of cardinal’s remarks ..."
Browse Our Archives
get the latest from
Catholic
Sign up for our newsletter
Books by This Author Books by Deacon Greg Kandra 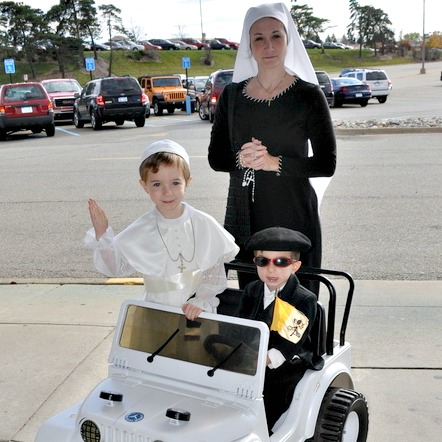 Catholic
Quote of the day, from a woman seeking...
The Deacon's Bench

Catholic
Quote of the day: "Lord, grant that we...
The Deacon's Bench
TRENDING AT PATHEOS Catholic

Damien of Molokai, Patron Saint of Divesting Oneself...
Damien of Molokai has long been one of my favorite Saints. He...
view all Catholic blogs
What Are Your Thoughts?leave a comment

27 responses to “Quote of the day”