Details from the Kansas City Star:

Bishop Robert Finn on Tuesday avoided a possible criminal misdemeanor indictment in his handling of a priest facing child pornography charges by agreeing to enter into a diversion program with the Clay County prosecutor. 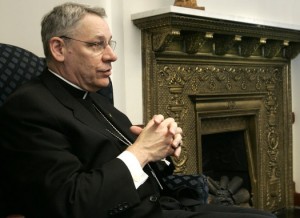 Authorities have pledged not to prosecute Finn, the leader of the Catholic Diocese of Kansas City-St. Joseph, if he lives up to the terms of a five-year diversion agreement.

The Clay County indictment alleges that Ratigan possessed three images of child pornography on a computer on May 13. White said each of those counts is a Class C felony, punishable by up to seven years in prison and a fine of up to $5,000.

Finn also is facing a misdemeanor charge of failing to report child abuse suspicions in Jackson County. He has pleaded not guilty. Finn is the highest-ranking Catholic official in the country to be held criminally accountable for the alleged misconduct of a priest in his diocese.

His agreement with Clay County requires him to meet face-to-face with White or his successor each month for the next five years to discuss any allegations of child sex abuse levied against clergy or diocesan staff within the diocese’s Clay County facilities. Finn also is to describe what steps the diocese has taken to address the allegations. White would then decide whether to encourage police to investigate any allegations.

Finn also agreed to visit all nine Clay County parishes to outline new programs the diocese is implementing to protect children. In those meetings, Finn will be accompanied by the diocesan ombudsman and a new director of child and youth protection.

“This will be a learning experience for the Bishop,” White said in a statement. “The diocese and the bishop acknowledge past reporting systems have flaws.” He said having an outsider in the mix who can trigger a criminal investigation “gives parents and children in our community confidence that if anything were to happen it will be promptly and effectively addressed.”

Finn, who was in Baltimore on Tuesday attending the U.S. Conference of Catholic Bishops’ annual fall assembly, issued a statement saying he was “grateful for this opportunity to resolve this matter and to further strengthen our diocesan commitment to the protection of children.”

“The children of our community must be our first priority,” Finn said. “Each deserves no more and no less. I stand ready to do all within my power not only to satisfy this agreement but also to ensure the welfare and safety of all children under our care.”

November 15, 2011
Study: 3% of Catholics left over the sex abuse scandals
Next Post

November 16, 2011 Dolan on Obama meeting: "Extraordinarily friendly"
Recent Comments
21 Comments | Leave a Comment
Browse Our Archives
get the latest from
Catholic
Sign up for our newsletter
POPULAR AT PATHEOS Catholic
1

Peter Kwasniewski: Gotta Exorcise Vatican I (1870)
Dr. Peter Kwasniewski is a radical Catholic reactionary writer and speaker. His words will be...
view all Catholic blogs
What Are Your Thoughts?leave a comment