A nun who dedicated her life to caring for exiled leprosy patients is a step closer to sainthood after the Vatican’s Congregation for the Causes of Saints recommended her canonization on Tuesday. 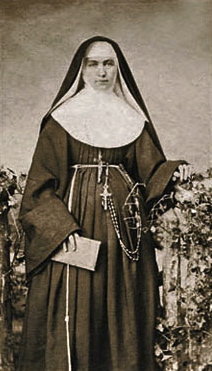 The recommendation to the pope confirmed previous rulings that a second miracle was due to Blessed Marianne Cope’s intercession.

In 1888, Cope succeeded Father Damien in caring for leprosy patients banished to the Kalaupapa settlement on Molokai. Mother Marianne died of natural causes in 1918 and was buried there. She could become the second saint with Hawaii ties; Damien gained sainthood in 2009.

The recommendation “is like the green light,” said Sister Patricia Burkard.

Burkard, a member of the Sisters of St. Francis of the Neumann Communities in Syracuse, N.Y., hand-delivered a small box holding the reliquary of bone fragments from Cope’s remains to Hawaii and toured the islands with the relic in May. It is on permanent display in the Cathedral of Our Lady of Peace in downtown Honolulu.

Mother Marianne, born in Germany and raised in Utica, N.Y., is one of five so-called Blesseds in the country. She was the only one of 50 religious leaders to respond positively to an emissary from Hawaii who requested for nuns to help care for Hansen’s disease patients on Kalaupapa, the religious order said, earning her the title of “beloved mother of the outcasts.”

“We are particularly joyful in Hawaii because of Blessed Marianne’s work here, but her example of selfless love can soon be an inspiration to all the world,” said Bishop Larry Silva of the Diocese of Honolulu.

And visit this website for more on her life and work.

December 7, 2011 U.S. bishop heads to Afghanistan for Christmas
Recent Comments
1 Comment | Leave a Comment
"I think I would have been happier had the CDF handled the nuns the way ..."
Theodore Seeber Vatican challenges “interpretation” of cardinal’s remarks ..."
"Blaming "Islamics" for this is like blaming the Pope for the Holocaust Denial of Hutton ..."
Theodore Seeber One killed, 44 injured in Catholic ..."
"It smacks to me of hyper-sensitivity, a veiled spiritual and intellectual pride, with regards to ..."
J D Pope Francis: “A Christian who complains, ..."
"Oh, no, we never change our mind, and we always agree, even on points of ..."
Ron Chandonia Vatican challenges “interpretation” of cardinal’s remarks ..."
Browse Our Archives
Related posts from The Deacon's Bench

Our Words Should Be Used To Build Each...
“And he called the people to him and said to them, ‘Hear...
view all Catholic blogs
What Are Your Thoughts?leave a comment