Researchers: nuns should take the pill to cut cancer risk 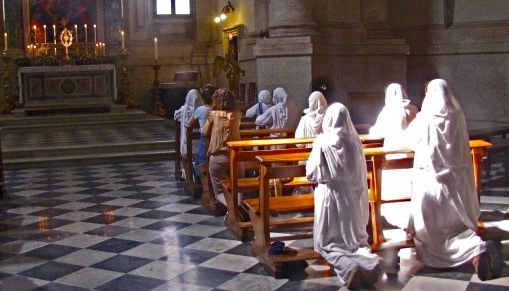 Strange as it sounds, yes:

Catholic nuns take a vow of chastity, so you might not think that any sister would need to be on birth control.

But oral contraceptive pills have other uses besides preventing pregnancy; in fact, Catholic bioethicists say there is no inherent conflict in nuns (or any other Catholic) taking these very same substances for prescribed, therapeutic reasons, such as for treating heavy menstrual bleeding or endometriosis.

A new article in the journal The Lancet goes one step further. It argues that nuns “should be free to use the contraceptive pill to protect against the hazards of nulliparity” – that is, heightened cancer risk among women who do not bear children.

According to the authors, Australian researchers Kara Britt and Roger Short, there are about 95,000 nuns in the world, and they are paying “a terrible price for their chastity”: increased risks of breast, ovarian and uterine cancer.

Women who don’t ever get pregnant have more ovulatory menstrual cycles, which have been linked to cancer risk, than those who do get pregnant. Research has shown that women who give birth to a first child at a young age, have more children and breastfeed, lower their risk of breast cancer, as well as endometrial and ovarian cancer. The Lancet piece cites a 1969 study of about 32,000 nuns in the United States from 1900 to 1954, which found that nuns had a higher likelihood of dying from these kinds of cancers than the general population.

“So the question has to be asked, is it worth the expense (and these drugs are expensive) to treat all at risk populations (in this case nuns) with preventative hormone replacement in order to prevent 13 cancers?” says Sr. Beatrice Hernandez, a Franciscan sister who is also a retired oncologist.

Britt and Short cite two large studies, published in 2010, on the health effects of the oral contraceptive pill, showing it reduces the risk of ovarian and uterine cancers, and does not up the risk of breast cancer. Women who had never taken the pill had a 12% higher mortality rate than those who used it regularly.

December 8, 2011 The end of an era
Recent Comments
67 Comments | Leave a Comment
"I think I would have been happier had the CDF handled the nuns the way ..."
Theodore Seeber Vatican challenges “interpretation” of cardinal’s remarks ..."
"Blaming "Islamics" for this is like blaming the Pope for the Holocaust Denial of Hutton ..."
Theodore Seeber One killed, 44 injured in Catholic ..."
"It smacks to me of hyper-sensitivity, a veiled spiritual and intellectual pride, with regards to ..."
J D Pope Francis: “A Christian who complains, ..."
"Oh, no, we never change our mind, and we always agree, even on points of ..."
Ron Chandonia Vatican challenges “interpretation” of cardinal’s remarks ..."
Browse Our Archives
get the latest from
Catholic
Sign up for our newsletter
POPULAR AT PATHEOS Catholic
1

67 responses to “Researchers: nuns should take the pill to cut cancer risk”