Climb every mountain: a priest’s journey up Kilimanjaro 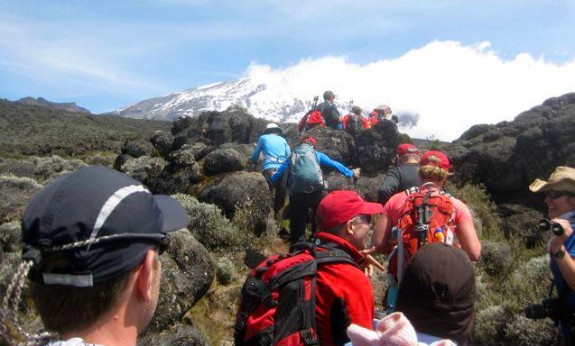 Last week, I posted an item about a priest from Des Moines climbing Mt. Kilimanjaro.  CNS caught up with him this week, and has more:

A pastor from the Des Moines Diocese has experienced a once-in-a-lifetime adventure with the hope that it will bring others to God.

Msgr. Frank Bognanno, 72 and pastor of Christ the King Parish in Des Moines since 2000, is among a group of cancer survivors who climbed Mount Kilimanjaro in Africa, a trip organized by Des Moines oncologist Dr. Richard Deming and led by world triathlete Charlie Wittmack, of St. Augustin Parish in Des Moines.

The group of 17 cancer survivors and 20 caregivers reached the top of Mount Kilimanjaro late in the afternoon of Jan. 10, thus becoming participants in the world’s highest “relay for life” at 19,340 feet.

A priest for nearly 47 years, Msgr. Bognanno had completed triathlons in the past and continued to run and walk regularly.

But in the six weeks before he began the climb, his fitness regimen changed to prepare him to climb Mount Kilimanjaro.

Deming, who is the director of the Cancer Center at Mercy Medical Center, led a group to Mount Everest last April, and has said that climbing a mountain is a metaphor that many cancer survivors use to describe their cancer experience.

It has been 17 years since Msgr. Bognanno’s initial diagnosis of prostate cancer, from which he experienced full recovery. Three years ago the cancer reappeared, but at a level so low that the approach had been to simply continue monitoring things.

He’d been seeing Deming for treatment, who at one point asked Msgr. Bognanno to join the cancer survivor expedition.

“I was a little hesitant at first,” the priest said. “I mean, my idea of camping is a Motel 6 with black and white television.” 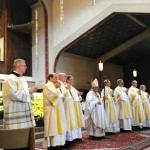 January 18, 2012 Beautiful. Uplifting. Funny. And so very true.
Recent Comments
0 | Leave a Comment
Browse Our Archives
get the latest from
Catholic
Sign up for our newsletter
POPULAR AT PATHEOS Catholic
1

The Song of Mary's Fulfillment and Ours
The Assumption of the Blessed Virgin Mary   Revelation 11:19; 12:1-6a, 10ab....
view all Catholic blogs
What Are Your Thoughts?leave a comment