The witness of Rick Santorum

The New York Times (!) has a sympathetic and moving look at his daughter Bella’s illness, and how it has shaped Santorum’s life and affected his campaign:

Isabella Santorum, the fragile 3-year-old daughter of Rick Santorum, has pulled through again. 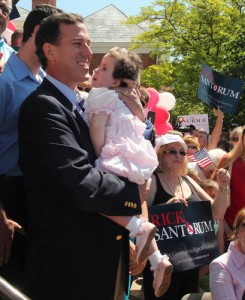 She came down with pneumonia over the weekend, a frightening turn of events given that Bella, as she is known, received a diagnosis of a fatal chromosomal disorder called Trisomy 18 shortly after her birth and has lived longer than most babies born with the illness. About two weeks after her birth, doctors sent her home from the hospital on hospice care, which is usually reserved for the end of life, not the beginning, saying her condition was “incompatible with life.”

Bella’s condition is a constant challenge for the entire family, especially for Mr. Santorum’s wife, Karen, and their six other children.

But her health issues present another kind of challenge to Mr. Santorum. As a presidential candidate, he is constantly traveling and must devote considerable time and energy to his campaign. Yet he is still a father. And ultimately, voters may judge him on both of his roles — as a candidate and a parent.

“I think his priorities are right, if you have a sick child — whether you’re running for dog catcher or president of the United States — your family comes first,” said Gail Hebert, president of the St. Petersburg Republican Club in Florida…

…Bella has emerged as the emotional centerpiece of Mr. Santorum’s campaign. His references to her are easily the most riveting moments of his speeches, usually leaving audiences silent and weepy. He has even built entire speeches around Bella’s story, telling certain audiences, especially those in churches, every painful detail of her birth and how the family has embraced her as a blessing.

On the campaign trail, the Santorums share the lessons they have drawn from Bella. Mr. Santorum told a church gathering in Charleston, S.C., that Bella can never “do” anything in her life in the traditional sense, except love him.

“She is a font of love,” he said. “And she made me understand that that’s how the Father looks at me. I’m disabled and unable to ‘do’ anything for him — except love him. And he loves me unconditionally.”

Many in the congregation wiped away tears.

January 30, 2012 Worth a thousand words
Recent Comments
0 | Leave a Comment
Browse Our Archives
get the latest from
Catholic
Sign up for our newsletter
POPULAR AT PATHEOS Catholic
1

Mary, The Miracle Child
Mary is the seat of Wisdom, for from her was born the...
view all Catholic blogs
What Are Your Thoughts?leave a comment