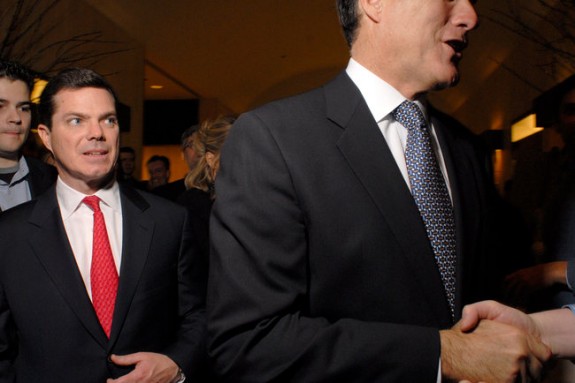 He’s a former prosecutor who keeps a statue of Mary on his desk — and he’s trying to woo Catholics and Evangelicals to the Romney cause.

The response seemed to defy the rough-and-tumble rules of modern politics. One of the nation’s most prominent opponents of same-sex marriage, Maggie Gallagher, had just told aides to Mitt Romney that she was endorsing Rick Santorum, a favorite of social conservatives, and encouraging her supporters to do the same.

So what did the Romney camp do? A few hours later, it invited her to send over a copy of her forthcoming book, for which Mr. Romney, it suggested, might provide a flattering blurb. “It was,” Ms. Gallagher recalled, “extremely unusual and gracious.”

The gesture, which caught her off guard and earned her admiration, was the deft diplomatic handiwork of Mr. Romney’s unseen but crucial weapon this campaign season: his liaison to the Republican Party’s right wing, Peter G. Flaherty, a former homicide prosecutor who keeps a statue of the Virgin Mary on his desk.

As Mr. Romney confronts the rise of Mr. Santorum, whom polls now show running even with him nationally, Mr. Flaherty, a Catholic, has been handed an urgent and tricky task — winning over social and religious conservatives who remain suspicious of the candidate’s ideological commitment and wary of his Mormon faith. As his experience with Ms. Gallagher suggests, Mr. Flaherty is not always successful, but he is reliably resourceful.

In a field that churns out hard-charging operatives, Mr. Flaherty, 46, is something of an anomaly, described by those he has courted as disarmingly mild-mannered, soft-spoken and philosophical. But they know him, too, as a man of deep feeling, propelled into the law by the murder of an aunt at a Boston church, where he returned to pray during jury deliberations as a prosecutor. He tends to begin conversations with an update on his three sons and two brothers, whom he speaks to several times a day.

He deliberately avoids the hard sell, to the point where some conservatives say the Romney campaign has not been aggressive enough. Mr. Flaherty is known to tell skeptical evangelical leaders and reluctant conservative luminaries backing rival candidates that he can live with being their second choice in the nomination contest. “Keep us in mind,” is a common Flaherty refrain, said those who have spoken with him, followed by this: “Our door is always open.”

That style has earned him a deep reservoir of good will, even among those who disapprove of Mr. Romney. Several conservatives said he is the only campaign official they will work with.

February 20, 2012
The myth and the reality of the "Catholic vote"
Next Post

February 21, 2012 When Benedict met Shirley
Recent Comments
0 | Leave a Comment
"I think I would have been happier had the CDF handled the nuns the way ..."
Theodore Seeber Vatican challenges “interpretation” of cardinal’s remarks ..."
"Blaming "Islamics" for this is like blaming the Pope for the Holocaust Denial of Hutton ..."
Theodore Seeber One killed, 44 injured in Catholic ..."
"It smacks to me of hyper-sensitivity, a veiled spiritual and intellectual pride, with regards to ..."
J D Pope Francis: “A Christian who complains, ..."
"Oh, no, we never change our mind, and we always agree, even on points of ..."
Ron Chandonia Vatican challenges “interpretation” of cardinal’s remarks ..."
Browse Our Archives
Related posts from The Deacon's Bench

The Catholic Bard 2020/21/22 Reading List
In compiling this list I looked through my CB archives and pulled...
view all Catholic blogs
What Are Your Thoughts?leave a comment