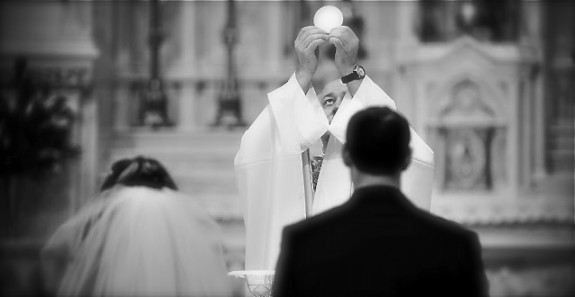 It’s something the pope himself has said needs a closer look.  And now a leading theologian is adding his voice to those calling for “re-evaluation.”  Details:

At the seminar in Salzburg by Austrian Catholic Action, the German theologian Eberhard Schockenhoff, a professor of moral theology at the University of Freiburg, has launched an appeal for a “theological re-evaluation ” of divorced and remarried persons and a new way to interact with them by the Church. According to Schockenhoff, the Catholic news agency Adista reports, the Church must emphasize its readiness for reconciliation in the spirit of the biblical sources and the practice of the early Church, breaking away from an attitude of “moral condemnation” that provokes in the interested parties a “painful feeling of exclusion”.

Benedict XVI himself admits that communion for divorced and remarried persons is an open question. He spoke about it in a meeting with the priests of the diocese of Aosta on July 25, 2005 and, more officially, in his speech to the Roman Rota, on 28 January 2006. Both times, the Pope urged them to “deepen” a particular case: the possible invalidity of a marriage in the Church celebrated without faith, for those who, having passed to a second union, have returned to the practice of Christian life and request communion.

Schockenhoff in recent years has studied the problem well enough to devote an entire book to it, whose title was taken as the theme of the day of study: “Opportunities for reconciliation? The Church and divorced and remarried persons.” Moreover, “separated persons, divorced persons and those who are remarried are not at the margins of the Church, but belong to her as do many other Christians who stray or have made mistakes.” His proposal, Adista specifies, is a radical one: the Church can and must give communion to divorced and remarried persons.

First of all, it is a “pastoral emergency”: the number of these Catholics, currently excluded from the sacramental life, is increasing and the problems related to their participation in Church life cannot be further delayed.

Secondly, there is no reason that bars this step, either in the Scriptures or in the practice of the early Church. The reference to Jesus’ words on the indissolubility of marriage before God, says the theologian, cannot simply be treated as a canonical norm, while in the Gospels of Matthew and Mark, and in the writings of St. Paul there would be “counter-tendencies” and “exceptional circumstances” in which divorce could be tolerated. And if the indissolubility of marriage remains “the only valid yardstick,” this does not mean, Schockenhoff argues, that from a biblical point of view there cannot be “emergency situations” as an exception to this standard.

UPDATE: For more on the pope’s thinking on this subject, check out this item from last year.

February 26, 2012
Dolan: "I asked Jesus to help me fight the same temptations he did"
Next Post

February 27, 2012 Mother Dolores at the Oscars: "This is very different than being in the monastery..."
Recent Comments
0 | Leave a Comment
Browse Our Archives
get the latest from
Catholic
Sign up for our newsletter
POPULAR AT PATHEOS Catholic
1