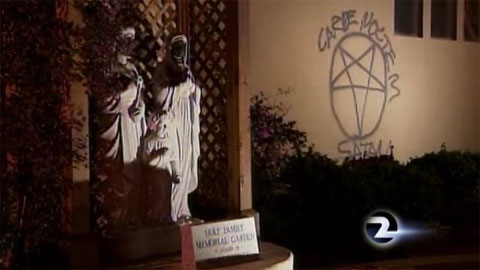 A Catholic church in Union City was defaced on Ash Wednesday with spray-painted pentagrams and messages about Satan, vandalism that is being investigated as a hate crime, police said.

Vandals knocked down a wooden cross outside St. Anne’s Church at Cabello and Dyer streets and used black spray paint to deface a statue and write on the church’s exterior walls, police said Thursday.

“Satan,” “Carpe noctem” and a pentagram were drawn on the walls, and spray paint covered the faces of a statue of Mary and Joseph, police said. Carpe noctem is Latin for “seize the night.”

Investigators have classified the incident as a hate crime because of the nature and timing of the vandalism. Ash Wednesday is the first day of Lent, a period of repentance and moderation for many Christians that precedes Easter.

“My gut feeling is that it might be local kids,” said police Cmdr. Ben Horner. “They were going for shock value, and they certainly achieved that.”

February 24, 2012
When pigs fly: the New York Times publishes an essay by the CEO of EWTN
Next Post 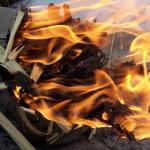 February 24, 2012 “Let us pray to set the world ablaze…”
Recent Comments
0 | Leave a Comment
"I think I would have been happier had the CDF handled the nuns the way ..."
Theodore Seeber Vatican challenges “interpretation” of cardinal’s remarks ..."
"Blaming "Islamics" for this is like blaming the Pope for the Holocaust Denial of Hutton ..."
Theodore Seeber One killed, 44 injured in Catholic ..."
"It smacks to me of hyper-sensitivity, a veiled spiritual and intellectual pride, with regards to ..."
J D Pope Francis: “A Christian who complains, ..."
"Oh, no, we never change our mind, and we always agree, even on points of ..."
Ron Chandonia Vatican challenges “interpretation” of cardinal’s remarks ..."
Browse Our Archives
get the latest from
Catholic
Sign up for our newsletter
POPULAR AT PATHEOS Catholic
1

Brief Exchange with Atheists (Including Archaeology)
These took place in a combox on anti-theist atheist Jonathan Pearce's A...
view all Catholic blogs
What Are Your Thoughts?leave a comment